By Bob Proctor, author of “The ABCs of Success: The Essential Principles from America’s Greatest Prosperity Teacher“ 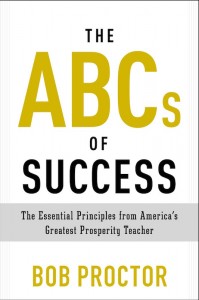 In Napoleon Hill’s classic book “Think and Grow Rich“, an entire chapter is devoted to persistence. Hill said, “There may be no heroic connotation to the word ‘persistence,’ but persistence is to character what carbon is to steel.”

Think for a moment about any accomplishment in your past and you will realize that persistence played an important role in your success.

Napoleon Hill studied many of the world’s most successful people. He pointed out the only quality he could find in Henry Ford or Thomas Edison that he could not find in everyone else was persistence. These men were often misunderstood to be ruthless or cold- blooded.

This misconception grew out of their habit of following through in all of their plans with persistence.

Milt Campbell was a friend of mine; we shared many hours together. Milt went to the Olympic Games in Helsinki, Finland, as a decathlon competitor. He was after the gold. Unfortunately, the man who had taken home the gold four years earlier in London wasn’t satisfied with one gold; Bob Mathius wanted two. Milt had to settle for silver.

However, Milt had formed the habit of persistence, and four years later in Melbourne, Australia, he earned the gold.

On numerous occasions Milt said, “There were many guys in school who were far better athletes than me, but they quit.”

I have studied successful people for over a quarter of a century and I’m convinced that the only difference between you and Edison, Ford, Campbell, or any other achiever is persistence.

What do you dream of doing with your life? Do it. Begin right now and never quit. There is greatness in you. Let it out. Be persistent.

Success is stumbling from failure to failure

with no loss of enthusiasm.

The best way out is always through.

Life shrinks or expands in proportion to one’s courage.