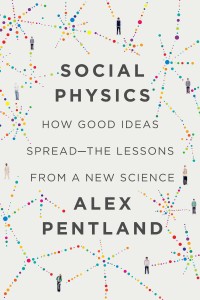 Why do ideas spread from person to person? How do we marry the worlds of social influence, big data, and behavioural economics?

Packaged as a “new science”, Social Physics is defined as a “new way of understanding human behavior based on the analysis of Big Data”.

Grounded in hardcore data-driven research (you can check out the MIT team’s academic articles here), it distils social, analytical, computational and managerial sciences into a discipline which helps us understand how collective intelligence and social influence works.

According to Pentland, traditional economics thinking is flawed. Contrary to what Adam Smith and many other economic “gurus” think, people are not rational and individual beings who act on their own prerogative.

Rather, it is our social ties with each other which define what we choose and decide upon in life. This is why human behaviours are often deemed to be “irrational”.

The key thing about Social Physics then is the meticulous processing of big data with behavioural economics, social networks and influence.

By adopting an empirical approach which examines social ties between individuals, we can identify the social and behavioural dynamics in networks and tune them to the desired frequency – just like radio engineers. This also entails looking at how ideas flow and aggregate in social networks.

This data-driven approach brings a more rigorous scientific approach to the management of social networks and cultivation of influence. We can also better predict the outcomes of adjustments made to organisational processes, frameworks and incentives to engender more productive outcomes.

In Social Physics, two key principles are at work – Exploring and Engagement.

Exploring refers to the novelty and “interestingness” of ideas while Engagement refers to the face-to-face (or Facebook to Facebook) social interaction which takes place between humans.

Although the age-old adage of content being king may still hold, it is engagement which drives the spreading of ideas in a community. We are creatures of habit after all, and embrace new ideas primarily through social learning from others doing the same thing.

The danger of too much engagement, however, is that we end up with the “echo chamber” effect. Teams may then suffer from groupthink or end up reinforcing each other’s ideas in a wholesale and uncritical manner.

To get around this, we may want to balance between the two.

When encouraging creative brainstorming, it is good to encourage individual introspection without the limits of organisational strictures.

However, when it comes to propagating and implementing ideas, greater emphases on engagement building activities are needed.

Putting this into practice, Pentland proposes that breaks could be synchronised such that employees in an organisation could interact with each other face to face.

Stretching this further, entire cities and economies could find ways to increase the likelihood of interaction amongst their citizens. Doing so could help to boost productivity and encourage the transmission of positive ideas.

In one of the experiments conducted by his lab, Pentland found that financial reward schemes given only if an individual’s peers met a specific goal worked far better than individual incentives. By adding on peer pressure, programmes have succeeded anywhere between twice to 16 times better than merely offering standalone rewards.

Sharing the example of stock-trading site eToro, Pentland described how members of the site can reveal their stock trades to each other and others to “copy” their trades. Those whose trades are “copied” will receive financial rewards.

This creates an incentive for disclosure. While their trades are open, their identities will be kept anonymous for privacy purposes.

Through analysing over 10 million transactions performed by the 1.6 million eToro members, Pentland made several points:

Following these observations, Pentland and team deployed subtle incentives to encourage greater interaction amongst the loners. By doing so, they actually managed to double their profitability.

As you’d imagine, applying the science of Social Physics requires a fair amount of research and resources. I’m sure Pentland and his team at MIT have their work cut out for them.

What we can do, however, is to apply some of these approaches to the way we manage our employees, communities and customer relationships.

To do so, we can start by considering how we can mine and measure the multiple streams of datathat are captured in our organisations. How do we make sense of them and map them against both formal and informal social networks and relationships in the workplace?

We could also devise rewards and incentives to affect group behaviours rather than solo endeavours. Can we encourage team efforts while boosting social learning amongst our employees? How do we design our work spaces to strengthen face-to-face interactions?

Beyond our organisations, we can also look at a data-driven approach in analysing social relationships online.

Rather than stick to our closely knitted circles of associates, we may want to venture further afield just like the “all embracing” stock traders above, to try different strategies and approaches. Doing so not only expands our abilities to learn, it may also widen our vistas of opportunities.

What are your thoughts on this?