by Mark Latham, Product and Innovation Director of Handepay

How much cash have you got on you right now? £10? £20? Probably no more than that. Your customers are more than likely to have exactly the same.

The British Retail Consortium discovered that cash use has dropped by 14% in the past five years and experts are predicting the end of physical currency inside 20 years. That’s why we wanted to see how ready businesses and customers are for that point in our near future when we become a cashless society.

For one day in June 2014, Handepay created The Cashless Street on one suburban shopping street in Manchester – the first time in the UK a street had traded entirely without notes or coins. The event was a massive success with shops packed well into the evening. Many independent business owners took the opportunity to engage with their customers to discuss the benefits of card payments.

As a result, many people came away with a greater understanding of how cashless payments can increase the efficiency of customer service, as well as save store owners the time and effort of dealing with masses of cash on site.

A poll of shoppers on the day found that 60% of people have left a shop because they didn’t offer card payments and 53% would shop local more often if they knew they could pay electronically everywhere. With fewer customers than ever carrying cash in their pockets, it is clear that the adoption of such a technology could be beneficial to every kind of company.

Cards are changing the way we shop. Just look at the facts:

One of the main reasons for this growth is advances in contactless technology, vastly speeding up the process of payments. Recently we have seen this expand to include contactless-enabled smartphones, wristbands and watches supporting e-wallets. Contactless is emerging as the public’s preferred methods of payment.

Contactless was originally developed in 2008. Its use became more widespread after the success of the London Underground Oyster system, which uses contactless payment to debit amounts from pre-loaded cards. There are now 44.7 million contactless enabled cards in circulation in the UK, making over 125 transactions a minute on VISA cards alone. Contactless activity is growing at an average of 22 per cent every quarter. In May 2014, an astonishing £146.1 million was spent on contactless cards the UK – a growth of 218 per cent over the year.

Contactless payment is booming. With each transaction taking less than a second to process, it speeds up customer service, cuts down on queues and reduces lost sales from people in a rush leaving. So as we approach a cashless society, it’s more vital than ever that all businesses get smart and keep pace with consumer demands. 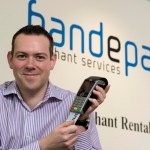 Mark Latham is the Product and Innovation Director of Handepay, a provider of merchant services to small and medium sized businesses across the UK.