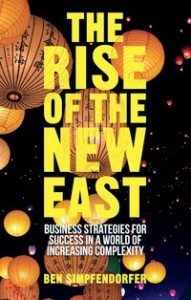 Are China and India still the “factory” and “outsourced service provider” of the world? How big is the market for Muslim-friendly products and services? What are the promises and perils of trading in the East?

In a sweeping expose on the dynamic forces shaping the “New East”, Ben Simpfendorfer’s “The Rise of the New East: Business Strategies for Success in a World of Increasing Complexity” provides an in-depth view of how the economic resurgence of Asia and the Middle East are changing global markets. Spanning halfway round the globe – from Turkey to the United Arab Emirates to India, South East Asia and China – the book brings one on a fascinating tour of the complex business characteristics governing our neck of the woods.

Let me highlight some of the book’s fascinating themes:

According to the author, over 400 million households in the East earn more than US$15,000 per year. In fact, the region has more than 325 cities of populations larger than 750,000. China alone has 143 cities which meet this size.

To tap this burgeoning market, companies should consider working with local partners who possess a more intimate knowledge of each market. They should also consider launching online B2C or B2B platforms incorporating mobile and social-commerce. This is supported by the East’s dispersed and young populations, high mobile penetration rates, growth of 2nd and 3rd tier inner cities (particularly in China), and traffic congestion.

The old paradigm of manufacturing in China and selling in Europe and US is no longer entirely true. Faced with the rising costs of labour, materials and land in Chinese cities, companies are increasingly sourcing from other Asian countries like Vietnam, Indonesia, Pakistan and Bangladesh.Rising consumer demand in China itself has also led its own manufacturers to favour selling domestically. Through differentiated sourcing, companies can better hedge their risks in the event that the Chinese economy implodes.

In an interesting twist, Chinese companies are now buying Western firms. Beyond Lenovo’s famous acquisition of IBM’s PC business, entertainment conglomerate Dalian Wanda bought American cinema operator AMC Entertainment followed by British yacht builder Sunseeker. The key here is to transfer foreign management expertise and technologies to China while tapping on its huge domestic entertainment market.By now, many would know that China is expanding aggressively to West Asian and North African countries like Saudi Arabia, Afghanistan, Algeria, Libya and Egypt. Much of its involvement is led by State-firms in heavy infrastructural industries like construction, utilities, and transport. What’s interesting though is how this growth has led to new markets for both Chinese and foreign private security companies (to protect sites against attacks), as well as professional service providers like lawyers, lobbyists and publicists.

From Bollywood to K-Pop to Indonesia’s punk rock, entertainment in the East is increasingly dominated by local acts. However, this varies significantly from market to market. While Hollywood has captured 53% of China’s box office in 2012, it only snared 10% of the Indian movie market. This led American entertainment giants like Disney and Viacom to partner Indian companies like UTV and TV18.An interesting success story can be seen in how Sony Entertainment India worked with the Board of Control for Cricket in India (BCCI) to create the Indian Premier League (IPL). To cater to younger Indian audiences, they shortened the test cricket games to three hours instead of a few days, and incorporated NBA-style cheerleaders.

With 31 majority Muslim countries in the East and a total regional Muslim population of about 1.1 billion, no other ethnic or religious group comes close to the Muslim market. Most Muslim consumers are also younger than those belonging to other religious groups. To market to Muslims, companies could take note of the holy month of the Ramadan, offer halal products, develop shariah-compliant Islamic financial services, or create mobile apps.A key point to note here is that developing halal products doesn’t limit a company from cross-selling to non-Muslims. In fact, many Chinese consumers associate halalwith purity. A case in point is Malaysia, where ethnic Chinese account for 40% of shariah-compliant investment product sales, or China where halal food products are viewed to be safer than non-halal equivalents.

Traditionally, Asian coastal cities have ruled shipping trade. 15 of the world’s top 20 container ports – including Singapore, Hong Kong, Shanghai and Dubai – are found in Asia. With consumer demand booming in inland Asian cities, however, road, rail and air transport networks will take on greater prominence over sea transport. While China’s highways and rail networks have facilitated efficient domestic logistics, gridlock is a major problem in most Asian cities.To exploit this opportunity, the author suggests that greater emphasis could be placed on improving cross-border connectivity. Beneficiaries include ASEAN mainland cities like Thailand, Myanmar, Laos, Cambodia and Vietnam. Asian economies may also want to consider how freight networks and warehouses could be structured to facilitate e-commerce. While doing so, however, special attention must be placed on catering for natural disasters like floods, earthquakes, typhoons, tsunamis, and mudslides. With the Pacific Ring of Fire encircling our region, the chances of catastrophes occurring here are somewhat higher than other parts of the world.

While it is blessed with a booming market, the East is unfortunately ridden with resource shortages. Consider water – the source of life. America and Europe have a median 12,800 and 7,500 cubic yards of water per person compared to the East’s median 3,700 cubic yards. Energy is also a pressing issue. With coal-fired power accounting for 77% of China’s power generation, widespread air pollution and coal mining disasters have besieged the Middle Kingdom.Fortunately, there is light at the end of the tunnel. Here, the East could leverage on the technologies and management expertise of the West in harnessing clean energy, increasing efficiency, and recycling limited resources. A case in point is how Hong Kong incorporated dual plumbing (plastic pipes for saltwater to flush toilets and ceramic pipes for clean water) for its buildings, thereby reducing its water footprint.

A Market of Diversity and Complexity.

Tackling the cultural and geographical idiosyncrasies of the wide and varied regions in the East, “The Rise of the New East“ is a compelling read for anybody keen to understand Asia’s contemporary business dynamics. Unlike Western authors who may Simpfendorfer certainly writes with a deep understanding and knowledge of the intricacies of trading in the East. Wide ranging and broad in its scope, the book provides an entertaining and enlightening read.Towards the end, the author concludes that new mental maps are needed to better understand the complexities and challenges of the region. While the commercial opportunities are growing and varied, one must also take note of the disruptive forces that the region brings.Contrary to popular belief, the East is also full of diversity and heterogeneity. To navigate these unknown waters, firms should partner with local partners and spending time in each individual market to understand cultural and other nuances. As an Asian with friends and relatives who work in the region, I can certainly attest to this.