The way we work and the way we pay are all changing thanks to new technology. No matter what business you run, your customers will expect to be able to pay you in a variety of new and different ways. Contactless payment is one method that has really taken off in the last 12 months.

To help you get the most out of it, here’s a beginners’ guide to understanding how contactless payment can benefit your business:

Contactless is growing and growing fast. Monthly spending on contactless cards has exceeded £100 million for the first time in March 2014, according to the UK Cards Association. More than 370 contactless transactions are made every minute in the UK, that’s six every second – and the figures have more than tripled in a year.

Although seen as a new technology, it began life in 2008 and has gone from strength to strength after the success of the Transport for London (TFL) system, where card holders use pre-loaded cards to pay for journeys on public transport via contactless.

The short-range wireless system called Near Field Communications (NFC) allows contactless payment to work. Debit and credit cards are fitted with an antenna that connects them with devices up to 5cm away. The cardholder passes their card close to a contactless enabled payment machine at the point of sale to register their payment.

The terminals ensure that only one payment is taken per transaction. To make a second payment, the card has to be taken out of and then reintroduced to the wireless range, and a completely new transaction is initiated by the sales assistant.. Software in the terminal checks for the presence of more than one card in the NFC range and will reject the transaction if it detects such a risk.

‘Tap and go’ transactions take less than a second, making shopping quicker and easier than ever. This reduces queues in your store, makes your customers happier and leaves you more time to engage with them.

Where is it already working?

Major high street names such as Marks & Spencer, Costa and Boots are all early adopters of the technology. While harder to measure, take up among smaller businesses has also been widespread. There will be at least one, if not more, businesses on your high street offering contactless payment. 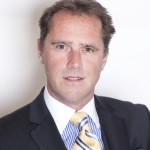 Andy Macauley is Chief Operating Officer and Director of merchant services company, Handepay. By taking a strategic approach, Andy has successfully grown the company into a national organisation. Handepay is a provider of merchant services allowing small and medium sized independent businesses across the UK to take card payments.