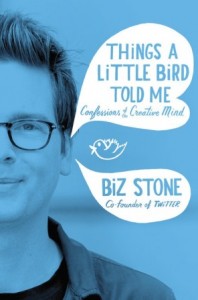 Since its founding in 2006, online social network and microblogging service Twitter has pretty much become a permanent part of the Internet as we know it. From mundane love messages to celebrity pronouncements, or to the sharing of online content to even being used as a way to coordinate anti-government protests during the Arab Spring, Twitter has been in so many different ways for so many different purposes it’s now hard to imagine our world without it. Today the it’s a global real-time communications platform used by over 400 million monthly users – of which around 200 million are active – and processes a billion tweets ever 2 and a half days on every conceivable topic.

But as some of us may know, Twitter started from very humble beginnings as a side project within the struggling podcasting company Odeo by founders Evan Williams, Noah Glass, Jack Dorsey and Biz Stone. Stone’s new book “Things a Little Bird Told Me: Confessions of the Creative Mind” is his version of Twitter’s journey from infancy to the technology giant it is today. Written in his effervescent yet open way, Stone lets you in on the behind-the-scenes at Twitter as the company was growing, from dealing with massive outages – the dreaded Fail Whale – to its boardroom struggles as it realized its potential. In the book, Stone describes much of the machinations behind Twitter such as its growing technological challenges, but also provides his perspective as he watched how its technology helped to shape the world as events unfolded, such as during the Arab Spring and the election of Barack Obama as president of the United States.

For aspiring startup technology entrepreneurs, “Things a Little Bird Told Me” provides a great insight into what it is like to live and breathe a startup. Stone details how he and his partner Livia (and the later, his wife) lived pretty much hand-to-mouth during the early days of Twitter. It reveals how big money is in the picture can challenge and strain even the best of friendships, and the desire to do good in the universe – or at least, be a neutral party – can fall by the wayside for less altruistic purposes. It’s not quite a total exposé – you can tell Stone’s rather guarded in his descriptions of the oustings of co-founders Jack Dorsey (who later returned as CEO) and Evan Williams, but savvy readers should be able to piece enough from his tone on what might have gone on during its tumultuous management changes. And Stone’s recollection of the time he and Evan Williams went to meet Facebook’s Mark Zuckerberg for a potential buyout is as hilarious as it is eye-popping.