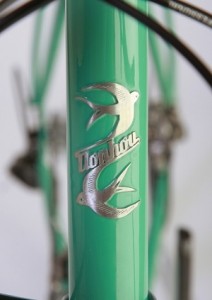 The start of every year is marked with “awards season” – a flurry of ceremonies celebrating the great and good that has perhaps been developed to keep everyone in an aspirational frame of mind during those dark winter months. In London cycling gets its own taste of awards season, with prizes presented at Bespoked – the UK Handmade Bicycle Show – in April. There may not be the A-list “selfies” of the Oscars and the “Best in Show” rosette has echoes of a village fete about it, but be in no doubt that this is a cool event showcasing some of our best and brightest bike building talents.

The London Cycling Campaign, a 12,000 strong membership charity that acts as a voice for everyone who cycles or wishes to cycle in London, was rightly delighted to report that a number of the prize winners at the 2014 Bespoked event hailed from the capital – a great vote of confidence for the role that cycling is playing in city life.

That “Best in Show” rosette went to Matthew Sowter’s Camberwell-based Saffron Bikes and their race bike. Far from the quaint scene of a vicar judging some tomatoes that the “Best in Show” title conjures up in the mind’s eye, this was a serious frame – fully stainless steel with a light pearl blue painted finish inspired by a 1936 Buick custom convertible.

Tom Donhou also produces some cracking frames from his Donhou Bicycles workshop in Hackney, and one of his works – a stylishly old school looking number – took the prize for Best Utility Bicycle.

Meanwhile frame builder Mark MacDonnagh of Talbot Frameworks in Crystal Palace won the Steve Worland Innovation Award with his Dalsnibba and its carefully optimised tubeset. The Dalsnibba takes its name from a mountain that overlooks the Norwegian town of Gerainger, where an annual duathlon is held.

Held at the Lee Valley Velodrome, home of London’s exciting 2012 Olympic cycling action, Bespoked is not only about the awards – it is also a popular stage for exhibiting some of the world’s top bicycles, old and new. Among the local exhibitors present at this year’s event were Roberts Cycles, presenting a modern twist on the family business’ trans-continental tourer, Oak Cycles and Malcolm of Lewisham. Bespoked 2014 also featured talks from a number of individuals including Mike Burrows, Isla Rowntree, Tony Corke and Peter Murray.

If Bespoked is anything to go by, in terms of attendance, interest and number of exhibitors, the London cycle industry is in rude health. It may be discreet in its nature – no towering chimney stacks, glistening skyscrapers or sprawling warehouses – but a network of workshops is leading the way in innovation, design and quality, and making waves across the world.