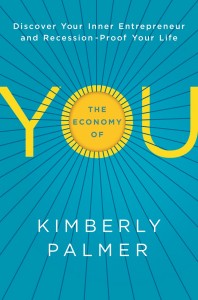 We’ve heard it all before – the economy is in its doldrums, and the best way to prevent being retrenched from your job is to actually have a backup plan… to be an entrepreneur. But that’s easier said that done – not everyone is so inclined to start their own businesses, and even fewer are actually good enough to ensure their business survives beyond their first year.

But Kimberly Palmer, senior editor and personal finance columnist for U.S. News & World Report who helms the popular Alpha Consumer blog, takes a different tack. She’s the author of the book “The Economy of You: Discover Your Inner Entrepreneur and Recession-Proof Your Life” which, despite its title, doesn’t quite exhort everyone to ditch their current jobs and turn their latent passions into money-making endeavors. Going by the book, she believes more in the idea of taking up a side job to help support one’s regular job, so much so she’s coined the term “side-gigging”.

Side-gigging is exactly what it sounds like, where you take up a gig on the side which helps provide an additional income stream to help supplement one’s regular income. And Palmer should know – she started a series of financial guides called Palmer’s Planners on Etsy.com when she realized that journalism provided little job security these days. The series of guides soon started to deliver a reliable and much-welcomed income stream.

In “The Economy of You“, Palmer highlights many other examples of how people are starting to explore their own creativity in entrepreneurial side ventures. You have that deli employee who bakes custom cakes at night, the instrument repairman who sells voice-overs on his own website, the graphic designer who sidelines as a classical singer, the social media manager who blogs about career advice, and many, many more. She shares their stories, trials and tribulations, but also how their side-gigging has helped relieve financial strain and provide a form of relief.

And true to Palmer’s affinity with guides, “The Economy of You” also provides ideas on what kind of side ventures you may likely to be interested in, as well as contains a series of worksheets – a side-gig starter kit, if you will – to help you generate ideas and put together a game plan for your financial liberation.

And you don’t even have to quit your day job to do that.