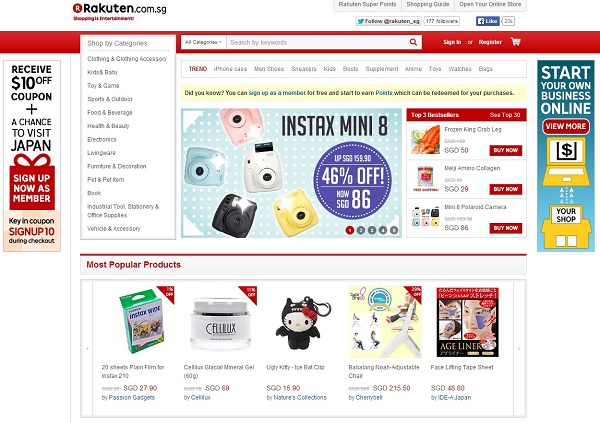 Japan’s top online shopping mall Rakuten has been flying its flag in Singapore for some time now despite not having launched a local version of its site, but it has finally done so – the electronic commerce and Internet service provider has today announced the official commencement of its operations in Singapore.

Rakuten some time last year announced its first-ever Rakuten Startup Challenge in Singapore, a competition that looks at getting Singapore-based entrepreneurs and developers to develop personalized e-commerce websites using Rakuten’s APIs (Application Programming Interface), and was even seen exhibiting a booth at Japanese produce trade show Oishii Japan. With the launch of its localized site, it opens up access for Singapore-based consumers to more than 120 Japanese and local merchants with over 40,000 products across more than ten categories including fashion, food, health and beauty products, electronics, kids’ and babies’ products, toys and games, livingware, furniture and decoration, books, pet products, and vehicle accessories. Merchants include seafood purveyor Kuriya Fish Market, Yokohama-based confectioner VANILLABEANS, top opnline drugstore Kenko.com, as well as GALSTAR, a fashion store with an extensive collection catering to a female crowd.

“At Rakuten, we believe ‘Shopping is Entertainment’ – our idea of service is to provide shopping as a form of entertainment in people’s lives. To do that, we make sure we have many merchants providing an exciting range of quality products,” says Mr Okamoto Shingo, head of Singapore e-Commerce Business, Rakuten. ” To make shopping even more enjoyable, we will also be bringing our hallmark Rakuten Super Sale – a big discount festive event – to our Singapore customers later this year.”

To celebrate the launch of its Singapore operations, Rakuten is offering free delivery from January 14 to 17. The e-commerce giant looks to acquire and host some 300 merchants for its Singapore site by the end of this year.