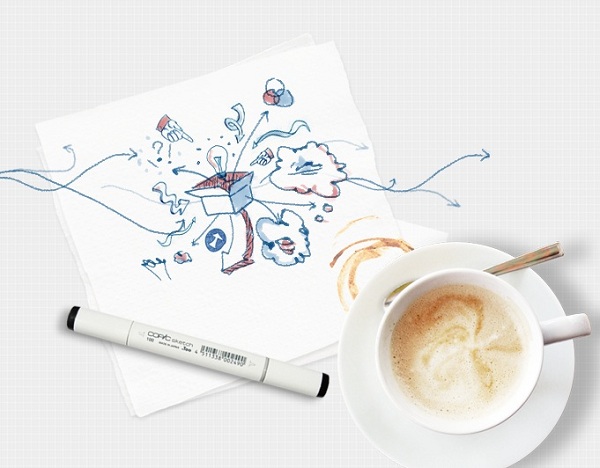 “There’s no such thing as a bad idea!”

Whether you’re in advertising, sales, HR, or just slaving away in the back cubicle, at some point you’ve probably been involved in a brainstorming session where someone has uttered those brave words. In fact, the mantra is often upheld as the number-one “rule” of brainstorming, long embraced and championed by experts.

But is it really true? After all, when you think about it, you usually hear those words when they’re being used to justify a less-than-stellar suggestion that’s just been made by a colleague. In reality, aren’t there at least a few bad ideas lurking in the shadows?

In our SmartStorming corporate training sessions, we always introduce the “no bad idea” notion. More often than not, a heated debate ensues.

Most of us have at least a vague understanding of the expression’s meaning — but many of us just don’t buy it. When the debate comes up, there’s always one participant, and often many more, who challenge this notion that bad ideas don’t exist. We typically hear comments like, Of course there are bad ideas! If we all decided to jump out of the window right now and defy gravity, wouldn’t that be a bad idea?

A Window on the “Storm” of Controversy.

The “no bad idea” mantra is not a new one. Alex Osborn, considered by many to be the father of brainstorming, believed that in order to be successful, participants must “suspend judgment.” Like most savvy brainstorm leaders, he understood the perils of allowing people to start criticizing ideas in the midst of a session. And today almost every well-regarded group idea generation methodology maintains the tradition.

So why do so many people feel strongly that there are bad ideas — ideas so bad they should be stopped dead in their tracks so as not to waste the time and energy of the group?

We were really fascinated, and a little puzzled, by people’s reactions. So we decided to post this question on LinkedIn: ‘We’ve all heard the expression There are no bad ideas. Do you agree? If not, why? If so, what does the expression mean to you?’ We wanted to see just how varied the responses would be.

Here is a small sampling of the responses the SmartStorming partners received:

“Of course there are bad ideas. When your product does not meet customer [expectations], it’s a bad idea.”

“In the army they used to say the only stupid question is the one not asked. There are plenty of stupid ideas but everyone should have the opportunity to express [them].”

“We are taught to encourage everyone to say only positive things to others’ suggestions and keep everything nice and rosy. Unless you want to sit around a campfire, sing ‘Kumbaya,’ and make s’mores, this is ludicrous!”

“There are many bad ideas out there, like harming oneself or others, taking advantage of others, and making foolish financial and business decisions.”

“Jumping out of an airplane without a parachute: a BAD idea…Buying MySpace for billions: a BAD idea.”

“I’ve sat in brainstorming sessions where ‘there are no bad ideas.’ Um, there are. Okay, some trigger innovative thinking. But most just waste time. Unfortunately, many people just like to hear themselves talk.”

The debate, as you can see, is fairly one-sided. Generally, there is widespread contempt for the “no bad ideas” notion. Yet we have a different take on it.

Surprise! A Lot of Good Can Come from Bad Ideas.

So… are there bad ideas, or not?

It all depends on how you look at it. There are obviously ideas that appear unfeasible, impractical, irrational, harmful, and potentially devastating. No one of sound mind would propose implementing such an idea, assuming they truly believed it to be bad. The real question isn’t whether such ideas are bad, but instead, should those ideas be cast aside as soon as they’re voiced?

Most brainstorming gurus agree that when searching for new, innovative solutions, it’s important to give even ideas that resonate as undeniably ‘bad’ a chance to be considered, debated, and developed. As Osborn put it, we should suspend judgment. He didn’t say to eliminate judgment, only to suspend it. This would imply that we will eventually evaluate and judge whether some ideas are unacceptable, impractical, or simply off target. But we must suspend that judgment until an idea has had a chance to percolate.

Read on for a few tips on why you should let bad ideas fly and how to manage them:

First, and perhaps most obvious, is the fact that rampant criticism in a brainstorm is offensive to many. When people’s ideas are quickly and consistently shot down, they become intimidated and are reluctant to share — not an ideal situation in a group idea generation session.

It takes courage to put forth an idea that is imaginative or radical sounding. Negativity and judgment create an unsafe atmosphere for sharing such ideas.

In the beginning, you want quantity, not quality.

As a rule of thumb, the idea generation phase of a brainstorm should be spontaneous and free flowing, where ideas are plentiful, offered spontaneously and without hesitation.

The moment an idea is shot down, the free-wheeling momentum will grind to a halt. It can take a group significant time to get back into flow, if they are able to at all. So even if an idea has no value, the ‘cost’ of killing it is too great, when considering the negative impact on the session’s productivity.

You never know when a so-called “bad idea” will contain the seeds of greatness within it.

We’ve seen it countless times in our work. A ‘bad,’ even absurd, idea is offered up, and within minutes it has transformed into a brilliant example of innovative thinking. In fact, like many brainstorming experts, we make use of some very effective idea generation techniques that actually invite participants to come up with the worst, most ridiculous, even distasteful ideas imaginable — and then to turn around or transform those ideas into great ones.

Consider the somewhat extreme “what if we all jumped out of the window” example. Anyone would agree this is a bad idea in and of itself. But from such an idea, one might develop an innovative emergency personal parachute product for individuals working in tall city buildings. Or conceive an improved process for evacuation from high floors during a fire. A new “team hang gliding” extreme sports event. A breakthrough advertising concept where a group of people are able to fly after consuming a new beverage. You name it! Any of these, and an infinite number of other possibilities, could be born from the “bad idea” that everyone in the room should jump out of a window.

That is, unless the idea is shot down prematurely before the potentially great idea within it has a chance to blossom. And that is the point: to suspend judgment until an idea has had a fair chance to show all it’s got.

When the time is right, you can kill it with consideration.

When is it appropriate and even productive to reject an idea? One of the most important concepts to understand about successful group idea generation is that there is a time to generate ideas and a time to judge and select ideas. These are two very different and distinct processes that require different thinking skills. During idea generation, thinking must remain spontaneous and free of any negativity or judgment. This is the optimal condition for generating the greatest breadth and depth of fresh ideas possible.

Later, once the idea generation process has been completed, it is then time to switch to the process of evaluating and selecting ideas, and subject the best ones to critique. It is during this phase in the session (or in a subsequent session) that ideas should be judged worthy or unworthy, practical or implausible, etc. By keeping these two processes separate, you optimize your effectiveness at both.

Most of us enter a brainstorm with the goal of generating fresh, innovative, game-changing ideas. However, if judgment and criticism are part of the ideation process, it is highly unlikely that the goal will be achievable.

Suspend judgment. Even if you know, without a doubt, that an idea is bad — really bad, even horrible — let it live, just for a while. You just might find a game-changing gem hidden inside! Now doesn’t that sound like a good idea?

A top creative professional for over 25 years, Mitchell’s Rigie expertise spans the fields of art, design, communications, strategic marketing, and human development. As a vice president and award-winning creative supervisor for advertising agencies — including Saatchi & Saatchi and Foote, Cone & Belding — and as a consultant for Grey Worldwide, he has managed creative teams in the development of campaigns for many Fortune 500 clients.

Keith Harmeyer’s professional background includes over 25 years in advertising and strategic marketing, sales and business coaching, and advanced presentation and communication skills training. As a marketing and creative executive at agencies in the Omnicom and Publicis networks, as well as founder and principal of his own marketing communications firm, Keith created countless successful brand-marketing programs and business presentations for many of the world’s best known and most successful companies.