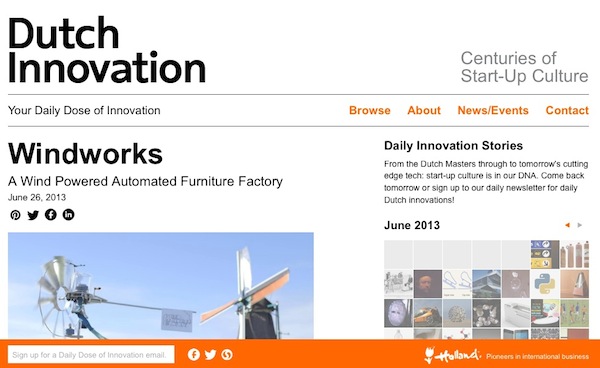 3D printing may be all the rage in the startup world now, but how many of us actually know that it was a Dutchman who actually created the world’s first 3D-printed house? In fact, The Netherlands would really like you to know that while it may be a really small country in northern Europe, that they are actually quite an innovative people.

So much so that the Royal Netherlands Embassy has developed DailyDutchInnovation.com, a website wholly dedicated to celebrating Dutch startup and innovation culture. Each and every day, the site will highlight a different innovation from a variety of industries and sciences, covering both current as well as historical examples. We’d get to read how the stock exchange, Bluetooth, the metronome, Python (a programming language), and indoor clouds all are rooted in Dutch innovation.

“In the Netherlands, innovation is not a conscious tactic. It is embedded in our culture,” says Roger Kleinenberg, Innovation Counselor at the Netherlands Embassy. “With two-thirds of our country at or below sea level and nestled between larger neighbors, survival and prosperity has always depended on our ability to invent solutions. Our creativity and pragmatism along with an openness to other ideas and customs enable us to sustain centuries of Dutch start-up culture.”

Take the famous Dutch art masters like Rembrandt and Vermeer, for example. “Although the Dutch Masters were active several centuries ago, many of their defining characteristics are still present in today’s Dutch start-up culture,” says Ambassador Rudolf Bekink. “They were known not to dwell over endless theoretical discussions on how things should be done, instead preferring to spend their energy actually producing art.”

As a national initiative, we think DailyDutchInnovation.com is pretty ingenious itself.