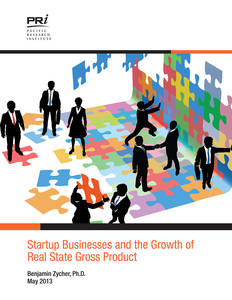 Authored by Pacific Research Institute senior fellow Dr Benjamin Zycher, the Startup Businesses and the Growth of Real State Gross Product study uses a sample of 49 states for the period from 1977 through 2010, employing a two-stage economet­ric model that revealed a positive correlation between an increase in net job creation by startups on state gross product.

“It is clear that further policy reform is needed if U.S. startup firms are to achieve more of their potential in terms of actual hiring and the attendant benefits in terms of aggregate output,” he further explains.

Dr. Zycher strongly emphasizes in his study that the impact of startup firms on the economy should not be underestimated. “These and other policy reforms would take advantage of the empirical reality that it is startup firms that are responsible for almost all net job creation in the U.S. economy, and would facilitate the hiring and the increased economic output that would result,” he writes.