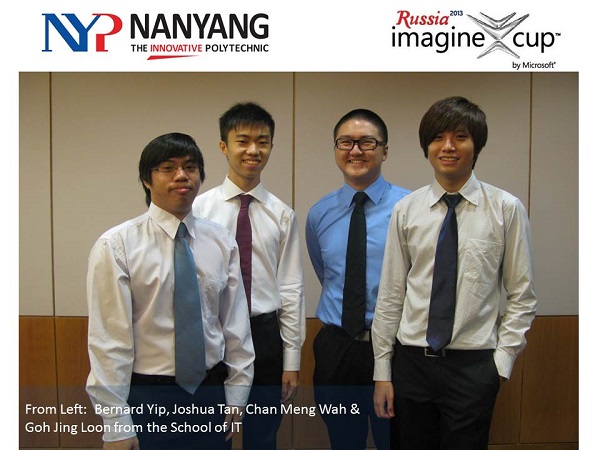 After a competition which saw participation by over 200 students from various institutions of higher learning in Singapore, two teams of students from Nanyang Polytechnic (NYP) clinched championship titles in two categories of this year’s Microsoft Imagine Cup local finals.

NYP team EyeCanSee (pictured above) was awarded overall winner and the top prize in the ‘Innovation’ category for their project, a military application called Kinect Infantry Training System (KITS), which makes use of the Skeletal recognition on Microsoft’s motion sensing technology Kinect and sensors in Windows Phone to analyze and give feedback on the soldier’s shooting posture. This entire package runs on Windows 8 and makes use of advanced macro programming in Microsoft Office Excel 2013 to generate visual analytics of an individual soldier’s performance. Apart from the expected military application, KITS can also be deployed commercial shooting ranges, schools and sports clubs to enables soldiers to achieve higher shooting accuracy.

In the ‘World Citizenship’ category, Team SilNovation (pictured below) – short for silver innovation – created a sensory-based fall signature and detection solution that can be placed anywhere throughout a house to detect if someone has fallen. The device can even tell the difference between humans and objects falling to prevent false alarms from being triggered. The solution is built on the Windows 8 platform and can be packaged as a fully-fledged consumer product targeted at families with elderly or disabled persons at home. 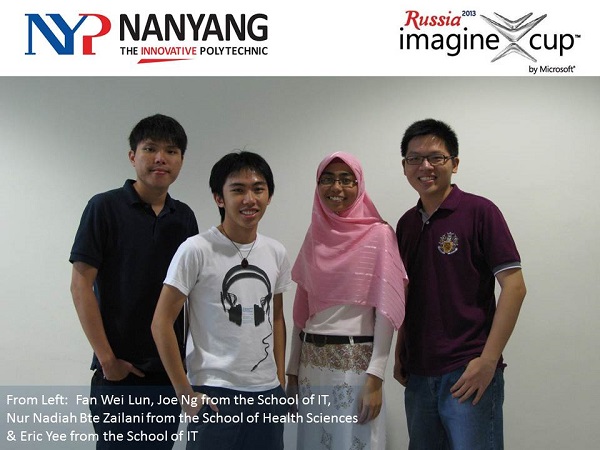 “Imagine Cup is more than just a software competition,” says Helene Auriol, managing director of Microsoft Singapore. “It is also a platform for our young Singapore talents to innovate, develop skills, and hopefully, build successful businesses to realize their dreams. In fact, over the last 11 years, we’ve helped many students build and live their dreams through nurturing their passion and creativity.”

This year’s competition features a total of three categories –  Innovation, World Citizenship, and Game; a slight departure from previous years. “With the new format, we hope to inspire more young entrepreneurs and help them build skills to succeed in their future careers. Countless students have been inspired through this competition to become tomorrow’s technology and business leaders, and we believe they will go on to bring about positive change in the world,” Auriol explains.

As overall champion, Team EyeCanSee will go on to represent Singapore in the Imagine Cup Worldwide Finals to be held in St. Petersburg, Russia, from 8 – 11 July, 2013. They will go head-to-head with other student teams from all over the world for the grand prize of US$50,000.