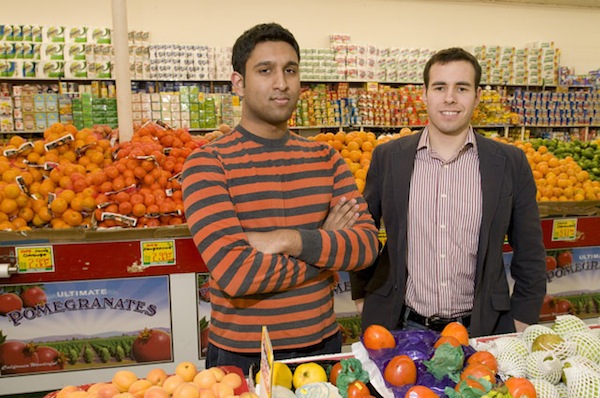 Rohan Mathew and Joe Shure, founders of The Intersect Fund

When Rohan Mathew and Joe Shure were editors at The Daily Targum — Rutgers University’s student-run newspaper — they were privy to two totally different sides of New Brunswick, New Jersey. On one hand were sparkling skyscrapers, swanky restaurants and luxury apartments with their well-off occupants; the other face wasn’t quite so pretty.

That side of New Brunswick were the down-and-out – the busboys, porters of those high-end hotels, dishwashers in those expensive eating places and other low-income residents who struggle to make ends meet. “(These were the) immigrants working in factories through temp agencies, long-time residents left unemployed by recession, and a host of others who have the drive but lack the luck to succeed,” they share.

Upon further investigation, though, Mathew and Shure found that many of these downtrodden were actually rather entrepreneurial – they ran small businesses on the side to help supplement their meager income. “It became clear that although many of these low-income entrepreneurs have quality business ideas and a lot of motivation, they often lack the business knowledge and seed capital they to get the most out of their enterprises,” they add.

That realization was to lead them to start The Intersect Fund in November 2008, a non-profit microlender that aims to provide small businesses in New Jersey with loans – from $500 to $20,000 – to help get them off the ground.

“We work with the smallest, budding entrepreneurs and meet them at their home or place of business,” says Rohan Mathew, now an executive director at The Intersect Fund. “With a lending process that is both high-touch and high-tech, The Intersect Fund is able to provide great customer service and a ladder to the mainstream financial system for hundreds of people.”

Let’s take Heidy Aviles, co-owner of the Columbia English Institute located on Bloomfield Avenue in Newark, for example. Aviles and her business partner obtained a loan of $10,000 from The Intersect Fund, which was used to refinance a predatory loan used to start their business and reduce their interest payments by 94%. That has enabled the school to grow and generate income, resulting in the creation of 9 new jobs in Newark this year.

She’s not alone. Since 2009, The Intersect Fund has lent more than $310,000 to 175 entrepreneurs and has doubled its loan volume each year. It anticipates investing $1 million in small business startup and expansion over the next 2 years, creating 300 new jobs.

Perhaps some of those New Jersey busboys, dishwashers and porters would be full-time business owners in time.