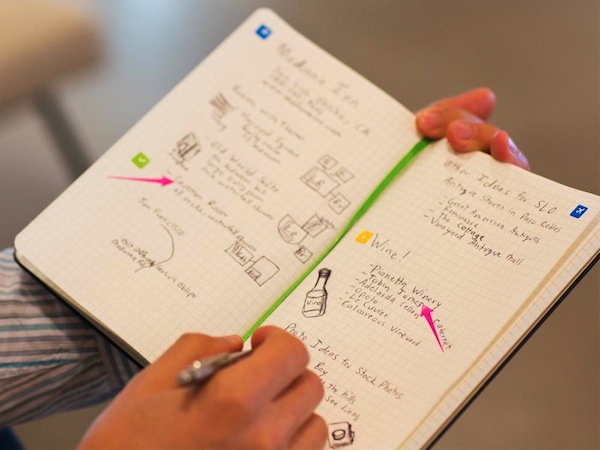 In a day and age where digital is heralded as bringing an end to good old print, perhaps its somewhat surprising that a technology company is looking to buck that trend. Evernote, which makes the note-taking app of the same name, has teamed up with notebook and accessory brand Moleskine to produce the Evernote Smart Notebook.

The Evernote Smart Notebook is so named because it can be used like any regular notebook – in both ruled and squared page styles – where you pen down your deepest thoughts and latent ideas, or anything else for that matter. Where it differs, however, is that you can then use the Evernote app to take a snapshot of the page, and optical character reader (OCR) technology captures your writing and stores your notes in the app (making it searchable and shareable too). Little “smart” stickers that come with the notebook help you categorize your notes – just stick one on the page before taking the picture and the note gets sent to the right category.

It’s a bizarre if convenient marriage of old-school and new technology, in a time where we’re already used to whipping out our smartphones and recording notes, ticking off checklists or even penning down ideas on various in-built or downloaded apps. But If you’re already an Evernote user and regularly use paper notebooks as well, getting the Evernote Smart Notebook is pretty much a no-brainer. In fact, the deal is made sweeter since each Evernote Smart Notebook comes with three months of Evernote Premium subscription – which is stackable!

“We already have a strong and growing community of more than 250,000 users in Singapore, and we are excited to offer them a great way to take notes by hand, but still enjoy the accessibility of all their notes, memories, photos and more in their Evernote ‘external brain’,” says Troy Malone, general manager of Evernote Asia Pacific.

“I use Evernote to manage almost everything in my life,” shares Marcus Tan, avid photographer, lead designer & co-founder of Carousell. “Using the Evernote app, I collect ideas for my photography sessions, as part of my ‘ideation process.’ The Evernote Smart Notebook also keeps me organized when designing the Carousell app, a mobile lifestyle marketplace (editor: we covered them here). This is crucial as I need to constantly iterate designs ideas, a process that can get messy quickly. I am able to quickly tag and sync my sketches and share with my team. It is effective and saves lots of hassle.”

Available in two sizes, the Evernote Smart Notebook currently only works with the Evernote iOS app, although an Android version is said to likely be in the works.

Is Your Boss A Grinch? How To Show Holiday Gratitude – And Retain Employees