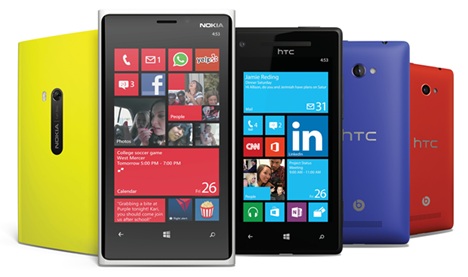 The new range of Windows Phone 8 devices will go on sale from November islandwide, but may find it an uphill task challenging the dominance of Apple’s iOS and the upstart GOogle Android. But Microsoft executives remain upbeat. “We are excited about the new features, technology and devices that we have brought to the market with the new Windows Phone OS,” says John Fernandes, Director of Marketing & Operations, Microsoft Singapore. “Windows Phone 8 ushers a new era of personal smartphone experience for connected individuals.”

Windows Phone 8 features Live Tiles, a very different UI that allows users to arrange their home screens however they want by “pinning” their favorite people, apps, music, games, photos and more (much like how you’d do it on Pinterest). In addition to Live Tiles, Windows Phone 8 offers a range of new features to enhance the smartphone experience such as Live Apps, where information is brought right to the start screen, such as the Groupon deal of the day, flight information and news headlines (similar to Samsung’s Touchwiz interface for its high end smartphones).

There’s also an interesting “Kid’s Corner”, which is a way to segregate apps and information on your phone so your kids won’t accidentally text your belligerent boss while they’re playing Angry Birds. Another feature is Rooms, essentially the Windows Phone 8 version of Blackberry’s BBM, so you can message and share files with others using Windows Phone 8.

The only disappointing aspect of Windows Phone 8 is the lack of features and apps for a more enterprise use, perhaps somewhat surprising for a company that’s dominant in that space. But with its built-in SkyDrive cloud service, an ability to work seamlessly with Windows 8 PCs and the Xbox 360 console – for example, being able to edit a document on the go and then back it up on your home PC – as well as an upcoming Skype app, that may change further down the road.

Will Windows Phone 8 finally be the Microsoft’s answer to cracking the mobile space?

You can find out more about the features on Windows Phone 8 on its blog.