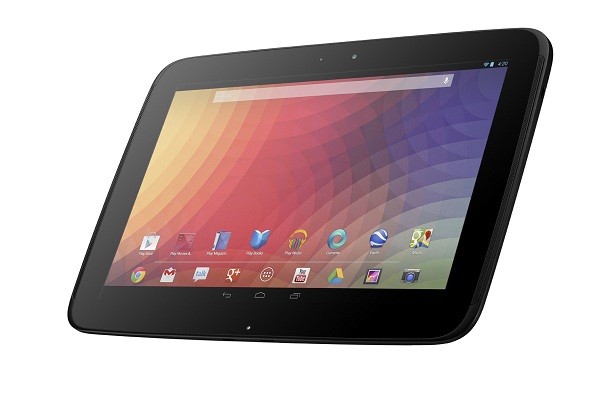 If you’ve been catching up on the most recent tech news, the latest gadget just announced is the Nexus 10, a 10-inch Android tablet put together by tech giants Google and Samsung.

This powerful device looks to marry Samsung’s best-in-class hardware chops with the best of what Google has to offer, including the latest Android version, 4.2 Jelly Bean. It’s an incredibly thin 8.9mm and weighs just 603 grams, so it’s definitely mobile and easy for road warriors to carry around. More importantly, it boasts a WQXGA display with 2560×1600 resolution as well as a fast dual core A15 processor and advanced MIMO WiFi for a pleasant browsing experience.

The Android tablet comes full with Google Chrome, Gmail, Google Talk, Google Maps for Android, Google Search, Voice Search, Google Now, Google+, and of course Gmail, giving it the possibility of being a great small business and mobile enterprise device, compared to the upcoming iPad Mini (which is probably too small for actual business use). Sure, it has YouTube, Google Currents, Google Play Store, Google Play Books, Google Play Movies, Google Play Magazines (it’s really designed for Google Play) so you’ll not lack for a multimedia or entertainment options, but it’s really its potential for small business use that makes the Nexus 10 so incredibly attractive.

As an entrepreneur or small business owner, would you get a Nexus 10? Let us know what you think in the comments below.

Is Your Boss A Grinch? How To Show Holiday Gratitude – And Retain Employees