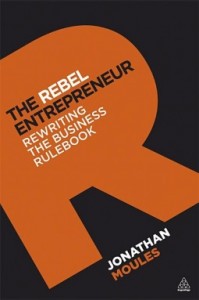 The title of the book by Jonathan Moules, “The Rebel Entrepreneur: Rewriting the Business Rulebook“, initially seemed like a form of tautology. Isn’t every entrepreneur a rebel by nature? Aren’t entrepreneurs the very people who take a contrarian view of making their own success instead of following conventional methods to achieving it?

Here’s an idea of what the book covers, as broken down by chapter headers:

1. Funding is for fools.

Moules believes that getting a bank loan to start a business is not ideal. In fact, he points out that conventional term loans are a far less common way to finance a business, and in some countries, credit cards are actually a more popular source of startup capital. His advice? Bootstrap, bootstrap, bootstrap.

The truth is that most entrepreneurs aren’t inventors, and it’s far more important to be able to out-execute everyone else in the market on that idea you have. First mover advantage usually isn’t an advantage anyway, and imitators tend to also become an acquisition of those they copy.

It’s important for entrepreneurs to recognize that they may not be the best person to bring the business forward. Thus it becomes critical to be able to hand over responsibility of certain functions to those who can do it better than them, and recognize that it is often necessary to bring in another person to manage a company’s next stage of growth.

4. The high price of success.

Moules points out that entrepreneurs need to think of their pricing strategy beyond it being the means of covering the costs of running a business. Pricing can be a form of branding, but more importantly, proper price management allows you to raise your prices in the future during bad times or when you run out of cash to pay the bills. Price competition is often suicidal.

5. Don’t get hung up on the business plan.

Entrepreneurs must accept that they will need to change their business model – most likely more than once – during the lifetime of the company. Pivoting may not be easy, but the point is to be open for change and grab opportunities as they come, rather than to stick with the original plan that may not go anywhere.

6. You cannot cut your way to success.

Knee-jerk reactions to a downturn in business by cutting costs and firing staff, Moules asserts, is not necessarily the best strategy to follow. In fact, in certain cases it may even make sense to spend your way out of an economic downturn – buying out a competitor, for example. But one thing is for sure – doing nothing is the worst option.

7. Do not waste your time selling.

Moules is not (really) suggesting that the entrepreneur himself should totally delegate sales to someone else. His point is really that sales is so critical to the survival of the business that the sales process should be accelerated – hiring the right sales people with the right attitudes, leveraging existing customers, and employing technology to support the sales process.

8. Failure is not failure if you learn.

Failure is something that every entrepreneur should not only expect but to see it as an opportunity to learn. The biggest threat to entrepreneurship is not failure, but the fear of failure.

Case studies cover both centuries-old companies as well as young stars of the internet age such as Twitter, Gilt Groupe, Criteo, as well as celebrity entrepreneurs James Dyson, Richard Branson and Steve Jobs. These case studies shed light on some of Moules’ views about entrepreneurship and why entrepreneurs should not be sucked into believing everything they read about business.

The only problem I have with “The Rebel Entrepreneur“? The advice he gives is so convincing and makes so much sense that it’s almost conventional and hard to reconcile it being rebellious in any way. A recommended read.