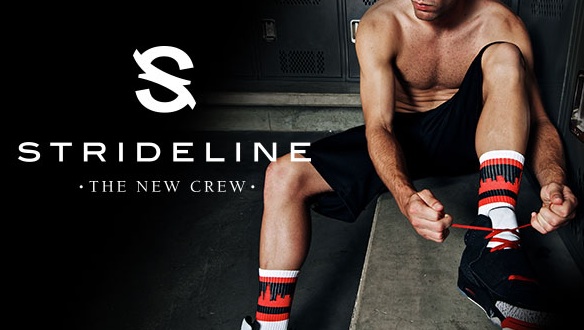 You’d think athletic socks are just a fashion commodity, but two college entrepreneurs think crew socks can not only be a fashion statement but also allow wearers to declare city affiliations. Founded by Riley Goodman and Jake Director in 2009 when they were both high school seniors in a Seattle school, Strideline makes a range of crew socks that come with a design of city skylines.

The original design featuring the Seattle city skyline sold out in three weeks when it was first launched. Beginning this month, Strideline is launching a range of six new city socks called “The New Crew”, featuring Portland, Los Angeles, San Francisco, New York, Chicago and St. Louis. Made with 25% cotton, 55% nylon, 15% polyester and 5% spandex, the socks come in a variety of colorways for each city represented, and retail for US$12.00 per pair.

The two founders continue to operate their sock business even as they are working towards their business degrees at the University of Washington. “Our idea was to meet the demand in Seattle for colored crew socks that were not simply an afterthought, but a distinctive part of an outfit.  The trend towards stylish socks is one that is growing – both among athletes, and as street wear. We are extremely excited to expand outside of our hometown with new designs,” says Jake Director.

“We look forward to completing our degrees and having the opportunity to dedicate 100% of our time to the business and its expansion,” adds Riley Goodman.

Strideline has seen considerable success in the Seattle market and is projecting $2 million in sales by 2013.