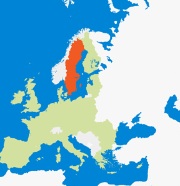 When it comes to using the Internet, one country does it better than the rest. According to the recent Web Index study by The World Wide Web Foundation, that country is Sweden.

As part of the study, 61 countries were ranked across seven categories – communications infrastructure, institutional infrastructure, web use, web content, political impact, social impact and economic impact. Sweden beat out the United States as it had more citizens online (90-percent, compared to 75-percent of Americans), and provided better and faster bandwidth per Internet user.

Interestingly, Singapore has the world’s fastest Internet speeds. The little country is ranked 7th out of the 61 countries in terms of overall web readiness, and 5th for web use, although it falls out of the top ten when it comes to the social, economic and political impact.

Here’s an infographic that shows some of the data from that study: