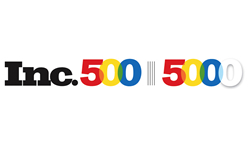 Business media company Inc. has unveiled its annual lists of the fastest-growing companies in the United States, highlighting the most dynamic and innovative independent entrepreneurs in the country.

Topping the Inc. 500 list is payment processor Unified Payments, which saw a whopping three-year growth rate of 23,646 percent, with other prominent brands on the list including social networking site Facebook, Yelp, yogurt maker Chobani, Giftcards.com, KIND and convenience retailer Kum & Go. The companies in the Inc. 500 saw a median three-year growth of 1,436 percent, the highest in the list’s 31-year history, which is all the more remarkable considering the tough economic environment.

“To rank among the 2012 Inc. 5000 – let alone, the Inc. 500 – a company had to thrive through three of the toughest years this economy has seen in living memory,” says Inc. editor Eric Schurenberg. “Their success in such times is eloquent testimony to their team’s creativity, resilience, and tenacity”

The complete listing of the Inc. 500 will appear in the September issue of Inc. magazine (available on newsstands August 21 to November 15 and on Inc.com), and the complete Inc. 5000 appear in Inc.com and in Inc.’s
Apple Newsstand edition, starting on August 21.