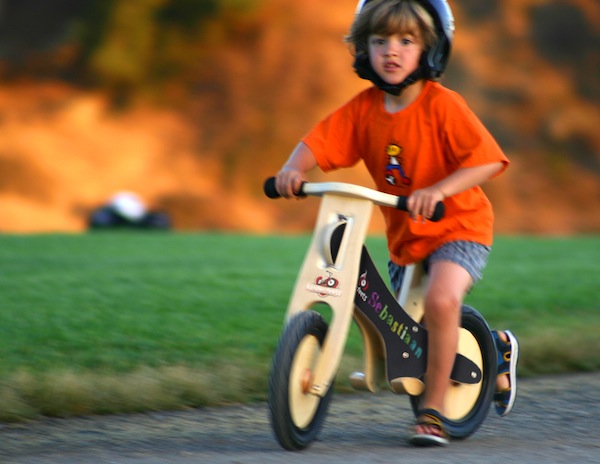 Cycling is a big thing in the Netherlands. There’s awesome infrastructure catered for the cyclist: not only is there 25,000 miles of traffic-free cycling routes in the country, it’s also one of the safest. And in Amsterdam, nearly everyone cycles.

And this cycling culture starts really young – children learn to ride as soon as they can stand. It’s in such a culture that Netherlands native Oscar Mulder, an award-winning and published designer of Mulder Design, has introduced Kinderfeets, a small training bicycle for children that comes without pedals. Kinderfeets, which is named after the Dutch word “kinderfiets” – which means “child’s bike” – allows the child’s feet to touch the ground, and is designed to encourage children to learn how to cycle as soon as they can walk.

The Kinderfeets bike features a low, step through frame lets children place their feet closer to the ground so they feel safe, while foot-pegs allows them to position their feet properly and train for future pedal use. An ergonomically designed, adjustable, cushioned and washable seat pads their bottom, while a variety of colors in a chalkboard finish lets them customize (or vandalize) their own bike.

Mulder’s passion for cycling stems from his Dutch heritage and his own lineage: his great grandfather was a bike designer, inventor and a bike shop owner in Amsterdam in the early 1900s. The idea for Kinderfeets came when Mulder was looking for a push bike for his son, but couldn’t find anything suitable so he decided to design one to meet his son’s needs.

And it worked. “My son learned quickly and safely on the bike I designed, and he enjoyed doing it,” says Mulder. “I wanted to share the same positive learning experience we had with other families and that is how Kinderfeets was born.”