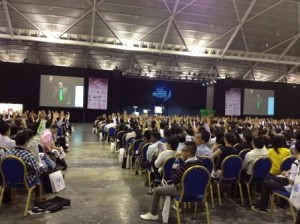 A woman is throwing a fit at the back of the hall as the event began.

“SHE STOLE MY SEAT!” she screeched at the ushers who were trying to calm her down. She had apparently lost her place right in front of the stage to another lady when she left to visit the restroom, and now she couldn’t get her seat back.

“I’ve queued up for hours, and now this,” she cries, near hysterically. The ushers offers her another seat, but she won’t hear it.

By now, the hall is reverberating.

“DO YOU WANT TO SEE A REVOLUTION IN YOUR LIFE?” The speaker on the stage challenges the 4,000-strong crowd. “IF YOU DO, SCREAM ‘YES’!” The crowd roars. A passerby may have mistaken the event as a church service – the Singapore Expo, after all, does see a couple of local mega-churches hire out some of its exhibition halls for weekend services. But it’s not. Welcome to the National Achievers Congress, a conference that looks to support those who want to achieve success – budding entrepreneurs, dreamers and the like.

It’s not even midway into the first speaker’s session, and more people continue to stream into the hall. Ushers, swamped by the unexpected demand, continue to roll out more chairs.

The Religion Of Success

If you think organized religion is scary, you’ve never been to a success seminar.

Over the weekend, this crowd would listen, enraptured, as an entire host of speakers share on a variety of topics, exhorting their own paths to success. There are communication experts, stock traders, branding gurus, property investors and even an Internet marketer sharing their tips for achieving wealth, financial independence and a happier life. Investor, motivational speaker and best-selling author of “Rich Dad Poor Dad” fame, Robert Kiyosaki, headlines this year’s event. His session, in particular, is packed – but it’s safe to say the hungry crowd lapped up almost every well rehearsed personal anecdote, joke or rehashed quote from every speaker. Their books, sold from booths along the main corridor leading to the event hall, are snapped up like religious literature. Success, it seems, breeds success. For some, success also comes from sharing with others about success.

What’s being sold here, though, is that success is an ideal. Many entrepreneurs I know already have that burning desire to achieve big things, to change the world, and get rich in the process – but more importantly, they see a way of getting there. But the truth is that for most other people hungry for success, they don’t even have an idea of what they want to become. Events like National Achievers Congress taps on such insecurities – and that’s why people pay good money to attend them.

The only issue I have with an event like the National Achievers Congress is that someone can come away with the wrong ideas about success – just like how that hysterical woman was so desperate for a seat right up front, as though success can be achieved by close proximity to success.

The question we should ask is: should we allow our definition of success be defined by someone else?