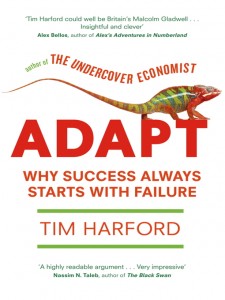 “Undercover Economist” Tim Harford’s latest book “Adapt: Why Success Always Starts with Failure” blends economics, psychology, evolutionary biology, and anthropology to explain why trial and error is preferred over grand strategic plans. Touted as “Britain’s Malcolm Gladwell”, Harford’s central thesis is that countries, companies and individuals should embrace an evolutionary and empirical approach in determining what works and what doesn’t.

Using analogies from evolution such as variation, selection and adaptation, Adapt uses far flung examples ranging from the Iraq War, Global Warming, 2007’s Financial Meltdown, to 3rd World Development efforts to prove its point. Some of its stories – such as the invention of the printing press by Johannes Gutenberg – date all the way back to the middle ages. Others, such as the almost accidental success of Google (which purportedly has no corporate strategy) are more recent.

In a chapter “Conflict or: How Organizations Learn”, one learns how Iraq war heroes like H.R. McMaster and David Petraeus defied commands from the Pentagon and worked with the locals to rout enemy forces. Their experience showed that local knowledge and networks were often more valuable than the most sophisticated weaponry that the US Armed Forces can deploy.

The work of university trained “randomistas” is lauded in another chapter on “Selection”. Here, Harford showed that financial and developmental aid may escape the clutches of corrupt officials or crooks by adopting field trials. This may sometimes work better in a top-down fashion (e.g. telling villagers that the government’s anti-corruption watchdog would audit their projects), and sometimes work better in a bottoms-up manner (e.g. getting communities to police their own developmental projects).

Harford skillfully suggests that the issue of climate change could perhaps be better managed by imposing a carbon price. Here, the proposed new rule that “greenhouse gases are expensive” provides a nudge which discourages consumers from purchasing products which emit prodigious quantities of carbon dioxide by increasing their prices through a carbon tax. This approach is far easier than trying to force countries and their citizens to reduce their overall carbon emissions by 10, 15 or 20 percent over decades.

My favorite part of the book is the one dealing with financial meltdowns where decoupling was proposed as the solution. Through a domino effect brought about by unnecessarily complicated safety procedures, oil rig crew were unable to prevent the Piper Alpha explosion back in 1988 on the North Sea. Such a phenomenon was repeated in the Three Mile island nuclear disaster and the more recent BP oil spill.

In a similar fashion, the 2007 subprime mortgage crisis was triggered not just by the creation of CDOs but by the labyrinthine relations between investment banks, consumer banks, and insurance companies involving re-insurance, credit default swaps and other complex financial derivatives. The accompanying demise of Lehman Brothers, AIG, Fannie Mae and other companies resulted in the irony of the poor American taxpayer bailing out the rich financiers.

In sum, Adapt urges us to spend more time doing and learning from our mistakes (albeit ensuring that failures are survivable) rather than trying to design the perfect plan. While it isn’t quite as compelling as other authors in this genre like Steven Levitt and Stephen J Dubner (Freakonomics) or Gladwell himself, the book still manages to score as good intellectual entertainment.

DIY Web Design: 5 Reasons You Shouldn’t Design Your Own Startup...

3 Things To Know When Building A New Website Or Blog