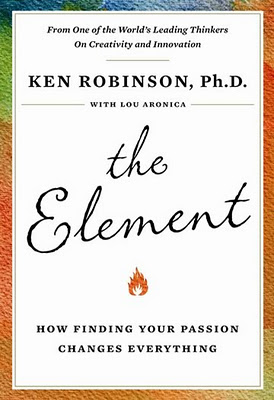 If you’ve never heard of Sir Ken Robinson, you obviously haven’t been following the TED series of inspirational talks. A renowned thinker in the the “development of human potential”, Robinson spoke about the need to reinvent education to better develop the diverse talents, aptitudes and passions of individuals all over the world. Here’s one of his most famous talks for reference.

In “The Element“, Robinson proposes that the element is “the point at which natural talent meets personal passion”. Finding our element allows us to tap onto that proverbial “sweet spot” and to maximize the vast powers of imagination, intelligence, feeling, intuition, spirituality, physical and sensory awareness inbuilt in every one of us. With a wide diversity of intelligences and talents, a uniform approach in teaching, nurturing and managing people will not work.

Poo poo-ing traditional notions of intelligence measured through standardized tests like IQ tests and MCQ styled school exams, Robinson suggests that the question shouldn’t be “how intelligent are you” but “how are you intelligent”. With much flair and panache, he cites how many examples of top achievers in diverse fields like acting, singing, dancing, visual art, directing and writing were poor students. Most of them shone when they escaped from the purportedly rigid constraints of the education system and even their own homes.

Key concepts from the book include the following:

1. There are multiple fields of intelligences too diverse to comprehend. As such, placing people into boxes at any age is not a good idea.

2. Creativity is the conduit for one’s imagination. It involves making things that tap into the various talents at one’s disposal and evokes the need to open one’s mind beyond the logical, linear and analytical. Creativity also uses both our brains and our bodies while reaching deeply into our intuitive and unconscious minds and feelings.

3. Creative practitioners in any field – medicine, music, mathematics, art – can empathize with being “in the zone”. This is that state of euphoric absorption and intense concentration where one is so focused and absorbed on the task at hand that the rest of the world just fades away.

4. Finding the right people to connect with – one’s tribe so to speak – is a vital aspect of building upon one’s element. Being in the right tribe can be transformative while providing three powerful components of tribal dynamics: validation, inspiration, and the “alchemy of synergy” which is that chemistry created by teams coming together.

5. There will be personal, social and cultural barriers to achieving one’s true potential, and sometimes, one has to take the drastic step of “swimming against the tide” or to find a different place to operate from.

6. Luck really has nothing to do with it. Rather, our attitudes, beliefs and perseverance helps us to shape our respective destinies while making the best out of seemingly adverse situations.

7. Having good mentors and coaches along the way is an important ingredient of the element. They can be for periods of time or even span decades.

8. It is never too late to start, subject to one’s physical limitations of course. Benjamin Frankling invented the bifocal lens at 78, Agatha Christie wrote The Mousetrap at 62, while Jessica Tandy won the Oscar for Best Actress at age 80.

9. One can be either a professional or amateur indulging one’s passion while holding down a full time job. This is the idea behind recreation – an active and engaged process which uses one’s energies and engages one fully while recharging his or her being.

10. Education is of course a key component of this. I love the example of the town of Grangeton which isn’t technically a town but an environment run by elementary school students at Grange Primary somewhere in England. It has a mayor and town council, newspaper, television studio, food market and museum, with children running all of it and guided by teachers. Such approaches in experiential and relevant learning may actually evoke better social and academic outcomes.

Perhaps the best part of the book is its use of numerous examples drawn from the lives of esteemed individuals like Matt Groening (creator of Simpsons), Paul McCartney, Richard Branson, Ewa Laurance and more. Their life journeys show that there are many routes to success which doesn’t involve being a doctor, lawyer or banker. Of course, there are also academically brilliant folks like maths whiz Terence Tao who managed to find his path in life without external pressures.

If you’re looking for something inspirational, thought provoking and motivating, “The Element” is definitely for you.