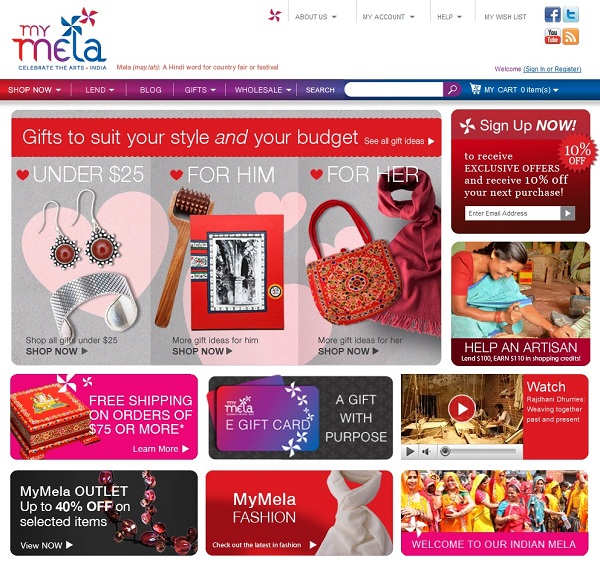 It’s not easy being an artist or artisan anywhere in the world; however, it’s probably worse in class- (and caste-) conscious India. India’s artisan community – faced by high interest loans and mass-produced crafts from other countries – is in a state of extreme poverty and duress. But an unlikely young heroine is emerging in the country’s art and culture scene to address its decline.

Sonali Mehta-Rao is an New York University (NYU) graduate and self-confessed human rights activist who has picked up the cause to help empower the artisans of India, where her heritage lies. And she’s only 23 years of age.

Like many of her peers Mehta-Rao is technology-savvy; so it’s no surprise her approach to add value to the India’s struggling arts scene involves technology. Mehta-Rao founded MyMela in 2011, of which she is now president – a global marketplace for authentic goods from India.

MyMela lets you access India’s fashion, accessories and home décor handicrafts – you’ll find crafts from various parts of India, even from its poverty-stricken rural parts such as the women artists of the Kutch region of Gujarat state. Yet the site doesn’t stop there – it even includes a KIVA-esque micro-lending function for cash-strapped artists, so yes, you can personally fund an artist. The loans are used by artisan groups to purchase raw materials, train workers and make capital improvements, and are repaid at zero-percent interest.  MyMela will also endow 20-percent of its profits to various health, education, training, and other community improvement programs in India.

“My hope is that our work will create a direct, positive social and economic impact for all of the artisans we work with by opening up new channels of business for them,” says Mehta-Rao.  “By supporting entrepreneurial spirit within underserved artisan communities, I anticipate that MyMela’s innovative business model and practices will empower thousands of men and women to lift themselves out of poverty.”