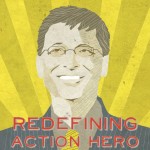 If you’re like most people, you’d probably worship the late innovative Steve Jobs over nerdy, geeky Bill Gates. But wealthy Gates, with his philanthropic work, is destined to end up in the list of the most philanthropic persons – alongside luminaries such as Andrew Carnegie, Warren Buffet and John D. Rockfeller.

Here’s an infographic that shows you what kind of impact on mankind Gates has:

This infographic was first posted on FrugalDad.com.