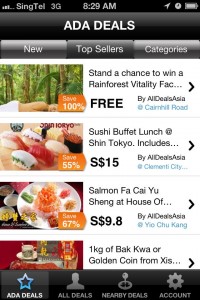 The daily deals industry may be taking somewhat of a beating to its reputation in recent times – stories of deals gone bad abound – but according to All Deals Asia, this space is still growing rapidly in Southeast Asia.

The daily deals aggregator says they are seeing more and more merchants listing their deals on deal sites, and consumers haven’t quite had enough of scouting for such deals. “Many (merchants) are beginning to see this group buying model as one of the risk-free marketing channels with no upfront costs,” says All Deals Asia founder Yiping Goh (we also interviewed her in mid 2010 when All Deals Asia first launched).  She adds that while there is some user fatigue going on related to prowling through the huge numbers of deal sites out there, more and more users are opting or adding deal aggregators into their list of sites to visit where they can browse and buy deals.

To deal with (pardon the pun) the issue of user fatigue, All Deals Asia – which aggregates deals from over 50 daily deals sites across the Asia Pacific region, including countries like Singapore, Malaysia, Philippines, Indonesia, Hong Kong, Thailand and Australia – recently launched an iPhone application to allow users to easily browse and compare deals on their iPhones. The app allows deals to be sorted by country, date, popularity, categories or proximity, making it easy for users to browse deals. There’s even a handy voucher reminder feature that deals buyers can turn on to alert themselves to use the voucher at a specific date and time, before it expires.

And while some daily deal sites, such as Groupon and deal.com.sg have their mobile apps, they can list only their individual deals. “By consolidating deals from different deal websites and organizing them into a single platform, we believe this will help customers save both time and money when searching for the best discounts,” Goh says. “Our iPhone app will offer greater convenience and also enhance users’ deals shopping experience.” She adds that the company recognized on hopping onto the mobile bandwagon, with the increasing mobile penetration here in Southeast Asia and an uptake in usage of smartphone applications.

All Deals Asia took around three months to develop the application in-house. Goh says that in developing the app, they had to consider balancing the need for user-friendliness and time-to-market with loading it with an endless number of features. There were numerous challenges too – they first had to determine the development team’s mix of expertise and adjust along the way.

“Most interesting was the fact that we were able to get our graphic designer and web developer who were new in mobile development to work with our mobile developer,” she reveals. “It was a lot of learning on the job and the results were amazing to see.”

They are looking at introducing an Android version soon. You can download the iPhone application here.