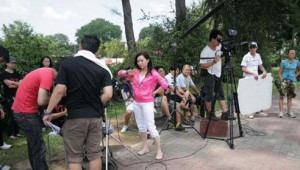 Founded in 2011, Singapore-based Supernova Media is a media production company that specializes in production and post production services for feature films, corporate videos, television commercials, and even online media.

For example, Supernova Media  is currently handling post production work for “Red Numbers”, a Mandarin-language feature-length movie. The company is also in the process of producing “Kjell’s Asian Adventures”, a collaborative Sweden-Singapore TV series that is filmed across ten Southeast Asian cities and confirmed for broadcast in 35 countries worldwide. Other projects include production support in Singapore for PLastic Fantastic”, a documentary series by European broadcast company SVT-1, as well as “Asia Impact”, a documentary screened on Singapore’s inaugural United Nations-Rotary Day 2011.

That’s a decent range of work for any fledgling media company in operation for less than a year, but what may surprise you is that Supernova Media is run by Alvin Soe who’s just 21 years old.

But even at his young age, Soe has amassed quite some experience – he’s written and produced content of different film genres for major broadcasters, as well as corporate and commercial productions for government organizations and private enterprises. He’s even an won entrepreneurship award – just ten months into starting his company.

A Journey Towards Entrepreneurship

Interestingly, Soe’s inspiration to become an entrepreneur stems from an influence during his secondary school years. He was a competitive badminton player, and his badminton coach also ran a chicken rice food stall, a gaming center, and even a sports apparel shop. “(That) influenced me to be my own boss,” Soe recalls. “So with a bit of entrepreneurial and competitive spirit, i decided to start my own media business in March 2011.” He’s proud to say that he started the company with no capital at all.

Prior to starting Supernova Media, Soe did explore other business options. But he finally decided on starting a media business, since that was his background – he graduated from Temasek Design School with a Diploma in Moving Images. “But knowing me, this media business won’t be my only business. I’ll go into other ventures in near future as long as it makes commercial sense,” he grins.

Being young brings another problem – he’s actually still serving his compulsory national service in the Singapore military. “Maintaining the business while in National Service is also quite tough. But I believe in serving it,” Soe asserts.

And the biggest lesson Soe has learnt so far in business? “It’s not what you have, but who you know,” he says. “Networking for the right contact will bring you access to the desired network and resources.”