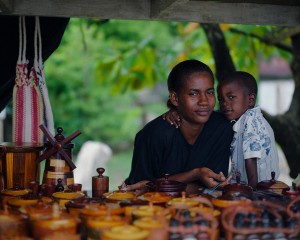 The benefits of microfinance have been debated since the ’70s when the Grameen Bank in Bangladesh began making tiny loans to impoverished small business owners. In 2006, Muhammad Yunus, the bank’s founder and “the father of microfinance,” won the Nobel Peace Prize. Since that time, at least one study has shown the practice does little to empower women in oppressed cultures or improve quality of life for poor people.

Yet there are still those who point to amazing microfinance success stories like these as proof that conscious lending can be a good deal for more than just the money men.

Mpunda had struggled for 10 years working at a hotel, a brewery, and a ruby mine. When he hit on the idea of selling clean water, a scarce commodity in Africa, he could barely afford the fees to power his tank. After three years of scraping by, he borrowed half a million Tanzanian shillings (or $360) from the Akiba Commercial Bank. The money helped him pay the municipal fees and buy three trucks to deliver water. His output shot up over 1,100% and his profits increased nearly six-fold. He’s using the money to buy more nutritious food for his family and pay for his sons’ schooling.

Lopez and his family were living in a plastic tent in Barrio Nelson Mandela, Colombia, with $300 to his name. Driven to a refugee camp by guerrilla violence, Lopez turned to Fundación Mario Santo Domingo for a $95 loan and opened a small convenience store. A year later, Lopez had moved his family into a concrete home where he ran the most successful butcher shop in the barrio.

The Microfund For Women helped transform Nadya Felah from a janitor into a successful businesswoman. She started a business selling gas cylinders with a loan from MFW that helped her buy two cars to make deliveries. In two years she has hired eight full-time employees, secured lucrative government contracts, and is able to support seven households besides her own in Amman. She is even mulling a run for office in the gas providers’ union.

Not all microfinance stories take place in remote villages in Third World countries. Lidia Calzado got a $10,000 loan from ACCION San Diego that allowed her to buy more inventory and thereby circumvent her supplier’s high interest rate. Her business selling jewelry and perfume is still growing, enough that Calzado can afford to do charity work with immigrant women. Amazingly, Calzado herself emigrated to the U.S. from Cuba despite speaking no English and being legally blind.

Since its organization in 1999, SHARE has become the biggest microfinance institution in India, and its success has prompted other banks to begin their own microfinance programs. The bank lends to groups of women, with each receiving $50 to $100 to buy rickshaws for transporting wheat to market or to help them open Internet kiosks. Of nearly 200,000 clients, over 98% of whom are female, 77% have significantly raised their income level away from poverty, and 38% no longer fall below the poverty line.

Joyce Wafukho used her small savings to open a hardware store in 1994. But with insufficient capital, she was able to sell only a few items. After five years of being turned down by lenders, she approached the Kenya Women Finance Trust for a $680 loan. Today, after five more loans from KWFT, Wafukho employs 25 Africans full-time in her business, which now also includes contracting and selling lumber. The business has assets of $27,000 and Wafukho is able to pay for not only her children’s health and education, but for her sister to go to college for a master’s degree.

All it took to turn Parveen Baji’s life around was a $70 loan from the Kashf Foundation. The illiterate mother of nine and wife of an abusive, drug-addicted husband, Baji had resorted to asking neighbors for food. But the loan allowed her to start a jewelry business that quickly took off. Now she also owns a restaurant and catering business that employs eight people, and she is putting her children through high school and a son through college. “Microfinance has changed my life,” she says.

After Hurricane Katrina, New Orleans native Bernard McGraw found himself homeless and unemployed. He settled his family in San Antonio, Texas and opened a Cajun restaurant in a shack in the city. When The Baptist University of the Americas asked him to set up shop on campus, he financed the project with a $4,265 loan from ACCION Texas-Louisiana to secure supplies and part-time employees. He now serves upwards of 100 customers a day and has done well enough to start “Gumbo Under the Bridge,” a program to feed the homeless.

To supplement her husband’s tiny income, Likelesh Gebru, a mother of five in Kacha Bira, started a small trading business. But when he was jailed for four years, Likelesh was left to provide for the family. As one of the first clients of the newly-built Wisdom Microfinance, she received 11 loans over 10 years and her business grew exponentially. Her profits have allowed her, her children, and four of her relatives to go to school.

Bodour Al-Jayousi has had a difficult life. When her parents divorced she was forced to drop out of school at age 15 and help her father sell jewelry. The business took off after two loans from the Microfund For Women, but after a disagreement with her father she had to abandon the business. A third loan from MFW helped her buy the hair salon where she had found work but had earned just $350 per month. Today she employs up to 12 people and provides for her sister who is disabled.

This article was first posted at OnlineMBA.com.