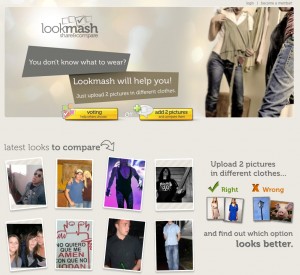 If we judged people based solely on looks, then our dressing and presentation is perhaps most important. And yet a look around Main Street surely reveals that fashion and dress sense can be sorely lacking. That’s where startup Lookmash (www.lookmash.com) comes in: aiming to help solve one of the greatest everyday problems – what to wear, what to wear.

Lookmash (www.lookmash.com) is an online fashion community that targets those who find it a hard time deciding what clothes to wear before hitting the streets. The way it works is this: users upload pictures of themselves in different clothes (or clothes they find online), pose a question, and send it out to the rest of the community – for their (perhaps not-so-pleasant) feedback. They can even see live results as the community votes – which is, of course, something you’d want since you’re not going to sit around and wait for comments when you need to dress up for an upcoming date.

Lookmash is founded by Lukasz Brzezinski, Rafal Gadomski and Aleksandra Renda, and based in Poland. Brzezinski and Gadomski, both 30 years old, met when they were studying at Poland’s University of Gdansk, and 24-year old Renda joined them two years ago when they worked on a project together.

“It’s really fun and useful for those who can’t decide what to wear before going out or what to buy while shopping,” explains Renda about Lookmash, who adds that the people who vote on the clothes choices of others find it “strangely satisfying”. And while the service isn’t yet fully available, it has already attracted over 12,000 users from around the world.

The idea for Lookmash came from its CEO Brzezinski, who once went shopping with his wife and had a disagreement on which shirt he should buy. He wanted to prove that his wife was wrong thinking that the shirt he liked was ugly, and came up with the idea for Lookmash, which believed would help him prove his point. (As a married man myself, good luck with that ever happening – ed.) Brzezenski then roped in Gadomski as CTO.

“As the only girl on the team – my role is to tell the guys what would women like on such services,” Renda pips.

The team believes that there’s no real limit to their target market and looks to work closely with online shops for their growth. “(The) clothing market is really tough and companies (constantly) search for new channels of distribution and promotion,” explains Renda. “One of our next steps in developing Lookmash is to introduce tagging.” That way, Redna adds, they’ll be able to mine user preferences and then prepare targeted advertising.

Lookmash plans to introduce some premium services in the near future, such as the ability to do styling, or increasing the limit of photo uploads to four.