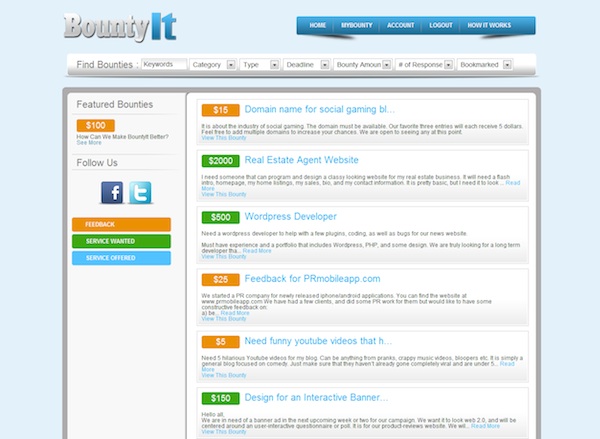 There are some tasks that you may not feel comfortable about – from lack of skill or time, for example – and prefer others who are better equipped to help you out on. That’s the premise of many freelance services sites such as e-lance, or crowdsourcing sites such as Fiverr.com. Here’s another that’s hopped on the bandwagon: BountyIt (www.bountyit.com) which lets you post a bounty to crowdsource services, and even comments and feedback.

Here’s how Los Angeles, California-based BountyIt works – you post up a problem or something you need some constructive feedback on. You then set a “bounty”, or a sum of money you feel it is worth. For example, you’re looking for a new title of your upcoming novel, so you can set a price on the best answer, or even disperse the bounty according to different responses you feel have helped.

“For example, if someone posts a bounty for $10 asking how they can better manipulate their product or service, and thirty people answer, but five people did a much better job, they could give all $10 to the top response, or $2 to each of the top five depending on what they feel is most deserved,” says BountyIt co-founder Cliff Bernstein, 22. “We realize there are plenty of places on the web to get free feedback, but we have seen so far that an incentive, even if it is small, inspires competition among the people responding, and therefore produces higher quality responses that are more detailed and insightful.

Users can also create a profile, set specific tasks or freelance jobs they can perform, as well as the amount of money they are willing to do it for. BountyIt‘s integrated agreement system then helps arbitrage between the buyer and seller on price, milestones and time frame, so that there’s less misunderstanding between buyer and seller.

Bernstein created the service with fellow co-founder Andrew Rosenau, 27, with the focus crowdsourcing feedback for “ideas or startups or anything really, because there wasn’t really a spot to do so for an incentive at the time”. The freelance section was added later, after they had some issues with a developer – sourced from Craigslist – they were working with. They did manage to find a reliable one later, on their own site.

“There is of course a large market for it, but also a risky one as you never know when one side is going to runaway from a project,” explains Bernstein. “So we have added an agreement system to help ensure that the project is completed, and both sides are compensated accordingly.”

The BountyIt team believes there are lots of opportunities in their space.  “As freelancing becomes more and more popular, we believe that we will grow along with the industry,” says Bernstein, who adds that the feedback element has more potential than in the current space they are focusing on at the moment. “We imagine it in the future it being useful for a far larger variety of industries such as travel, education, brick and mortar businesses, etc. By providing a cash incentive, he says, sees more qualified people respond with what will help the ‘client’ the best, in order to have a chance at receiving that incentive.

But they concede that the key challenge is that there are already plenty of online freelance marketplaces available, and recognize the need to differentiate their service such as their potential user base understands what they stand for.

“We hope to be a fun and competitive place for people to earn some money and get some knowledge and work done as well,” adds Bernstein.

Entrepreneurship, if done successfully, is truly the key to freedom with your career, believes Bernstein.

“It also seems to be a growing interest especially in our generation,” he says. “Although not every idea is carried out, I think almost every person I associate myself with has had at least one app or website or small business idea that they have considered, and would most likely rather do than their current employment status.”