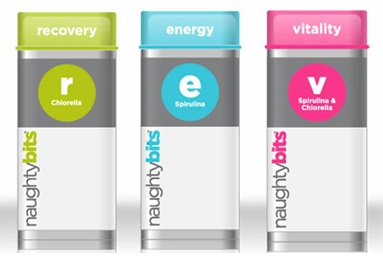 You’re forgiven if you thought Naughtybits by The Naughty Nutritionist sounded, well, naughty. But Naughtybits is actually a series of nutritional algae tabs – ENERGYbits, RECOVERYbits and VITALITYbits – that are meant as a form of power food for active consumers and atheletes.

Each Naughtybits® algae tab is the size of a tic tac®, and a single serving of 12 tabs – the recommended minimum daily serving size – delivers an amount of nutrition that exceeds that found in a typical serving of greens or a protein bar. And considering that algae provides three times more protein than steak (twelve times the amount of bio-available protein), fifty times more iron than spinach, four times more chlorophyll than wheat grass, most B Vitamins, all of the electrolytes and forty other nutrients. All for just one calorie per tab.

Algae as food has an interesting history. In 1951, algae was considered the answer to America’s escalating nutritional needs. But it never did take off, mainly because algae was too challenging to grow in a cost effective manner – even though it was successfully used as a protein source in both Germany and Japan when starvation was rampant after World War II. By the early 1960’s, the Japanese were growing chlorella algae on a large scale and had even patented some production techniques. Algae is now a multi-billion dollar industry in Japan, but rather unheard of in other parts of the world.

Until now, with Naughtybits by Boston-based The Naughty Nutritionist.

Now all we need to do is overcome the idea of eating pond scum.