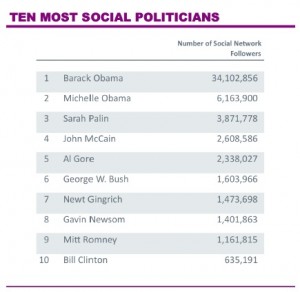 We all know that since its advent social media has played, and will continue to play, a huge role in politics. For example, during the 2010 election some 22-percent of online Americans used a social networking site to engage with a political campaign. The question is: how much influence and impact does it really have? A new report, released late last month by social media research and analysis company Colligent, aims to shed light on this.

According to Colligent‘s report – based on data collected by the company on more than 500 politicians and more than 240 interest groups from May 18 to August 24 – some 3.19%, or 9,249,932, of the social network profiles the company measured are fans of at least one politician, and 7,760, 930 are fans of at least one advocacy group or organization. By examining various metrics used to measure successful political and cause social media presences, Colligent also looks particularly at the increasing and decreasing engagement of interest group followers with the two leading 2012 presidential candidates helping determine which clusters of people Barack Obama and Mitt Romney have the most strength with on social media sites – and where they don’t. For example, a deeper look at Romney’s social media metrics shows that while he has a more intensely engaged social network base, it’s still largely made up of political junkies and insiders.  On the other hand, while Obama’s base is broader and reaches average voters, he’s still most strong with union followers.

The report also assesses the overall effectiveness of members of the House of Representatives in setting up their social media sites, and even asks whether musicians who speak out on politics really have anyone listening to them.

But with social media users having a multiplier effect – spreading word about politics and causes to other members of their personal social network – measuring social media reach is now more imperative than ever. As politicians and advocacy groups establish their social networking presence and attempt to engage American voters who are active on social media sites, campaign managers will need benchmarks for success and a means of measuring their efforts and voter response.

“Our online life is an extension of our physical life and social media has exponentially increased the organic power of traditional ‘word of mouth,’ says Sree Nagarajan, founder and CEO of Colligent.  “With every passing year, Americans spend more of their time on social networking sites.  Consequently, social networking has become one of the principal ways they learn about and interact with social causes and politicians.”