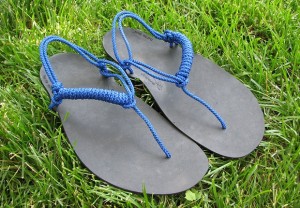 Just look at Invisible Shoes, based on the traditional huarache running sandals – fashioned out of old, used tires – of the Native American Tarahumara people of northwestern Mexico, which allows runners a barefoot experience yet with a layer of sole protection for complete natural movement, a lighter stride and strengthens your feet to boot. Unlike Loom smart and vegan sneakers, which combines technology and social consciousness for shoes that are 100% waterproof, breathable, light-weight and flexible, Invisible Shoes takes innovation in a different direction.

Founder of Boulder, Colorado-based Invisible Shoes Steven Sashen was inspired by New York Times bestseller “Born to Run” by Christopher McDougall, and set about making a higher tech version of the huarache running sandal using some hi-tech rubber sole material from Vibram and and some eye-catching cords. When he ran in them, he found that his chronic calf, knee and hamstring injuries quickly disappeared. And miraculously, Sashen’s life-long flat feet even developed arches. He was also swamped by requests from other runners who wanted their own pair. Chuffed, he started Invisible Shoes in end 2009, and began selling his “barefoot” shoes online. He’s since sold over 10,000 pairs to buyers from 55 different countries. 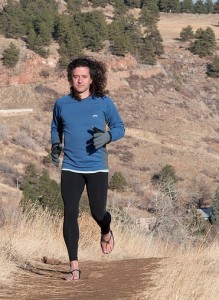 Interestingly too, that demand is growing for this kind of shoe. With over 85 barefoot or minimalist footwear options on the market from over 20 different companies, minimalist running is getting increasingly by health and fitness-minded people around the globe. Industry analysts project that minimalist footwear will make up 10 percent of running shoe sales in 2011, or US$500 million of a US$5 billion market.

To capitalize on this trend, Invisible Shoes introduced in July this year the first and only outsoles specifically designed for barefoot running sandals, in 4mm- and 6mm-thick versions. Co-developed with two former lead designers from Nike and Reebok, they feature soles made from a special rubber – FeelTrue™. What is interesting is that consumers can choose to customize their own sandals with different cords, even assembling the sandals themselves. Some users even debate and argue over different methods of tying the cords for the best fit or a comfortable run. Ten-percent of net profits from each purchase of custom Invisible Shoes is donated to the Tarahumara Children’s Hospital Fund.

The company recently received US$300,000 in funding from private investors to help the company scale. Not surprisingly, Sashen is eager and excited to focus on expanding the Invisible Shoes brand further. “While we’ve been thrilled with the organic growth of the company, this investment allows us to accelerate our aggressive, high-margin, scalable business plan,” explains Sashen.

The funding will be used for marketing development, product line expansion, further growth of a successful online platform and additional expansion into the national and global markets. With the additional funding, projections estimate company growth at six times its current value in 2012.