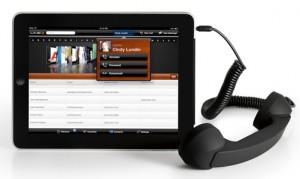 If the land-line isn’t dead yet, here’s yet another reason why it should be – San Francisco-based mobile communications technology company Line2 is transforming your handy tablet device into a powerful mobile communications hub by, yes, adding a phone line. Line2‘s iOS and Android applications adds a full featured phone line that can place and receive calls and carrier-grade text messages over the device’s Wi-Fi or 3G connections, turning these devices – such as the Apple iPad – into a mobile office at one’s fingertips

“Following our customers’ lead, we’ve created a brand new version of Line2 from the ground up to take advantage of the unique capabilities of the iPad. We invented a new type of communications device,” says Peter Sisson, founder and CEO of Line2, who adds that the iPad has been the company’s best-converting platform for new customer signups. “I’ve completely replaced my office deskphone, using the iPad 2’s built in speakers and mic as a speakerphone and a Bluetooth headset for more private conversations.”

Like Cisco’s WebEx, Line2 can turn your tablet into a nifty on-the-go business tool for conference calls. The app has advanced calling features including full caller ID support, the ability to juggle multiple calls, visual voicemail, voicemail by email, call waiting, call transfer, and conferences for up to 20 people. You can even multitask while using Line2 and perform other tasks while on a call, or receive calls while engaged in other activities on the iPad.