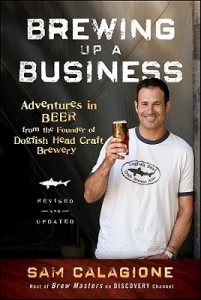 If you know anything about America’s beer history, you would know that Sam Calagione, the founder of Dogfish Head Brewery, is one of the industry’s leading pioneers and innovators in the craft brewing segment. In fact he’s one of the industry’s more recognizable faces as well, having been featured in 2009 beer documentary film Beer Wars by Anat Baron as well as fronting Discovery Channel’s Brew Masters series.

His book, “Brewing Up a Business: Adventures in Beer from the Founder of Dogfish Head Craft Brewery“, is as much an insightful look into the history and business of Dogfish Head Brewery as the American beer industry. In the book, Calagione chronicles his struggles and challenges in setting up the first ever microbrewery in the state of Delaware, shares his intense passion for making the most interesting beers in the world, and at the same time gives his businessman’s perspectives on starting, running and growing a business. “Brewing Up a Business” is not exactly a blueprint or a step-by-step guide for aspiring entrepreneurs to build their own microbreweries – Calagione is not quite dumb enough to make it too easy for potential competitors – but still there are plenty of takeaways. For example, make sure you check the laws in your state that brewing is not illegal, or getting feedback from your customers is the best way to iterate your product.

What makes the book compelling reading is the entrepreneurial spirit embodied by the man himself. You can almost say that the owner of a brewery that makes “off-centered ales for off-centered people” looks at life and business so differently – in a good way – and that makes him a role model entrepreneur.

And in case you think a brewery owner can’t possibly write as well as he brews beer, let me assure you that Calagione can write. He may not be the Anthony Bourdain – TV travel chef of “No Reservations” fame and author of “Kitchen Confidential” and “Medium Raw” – of the beer business but Calagione spins his tale well.

If you love beer like I do, you’ll find “Brewing Up a Business” a fascinating – and thirst-inducing – read.