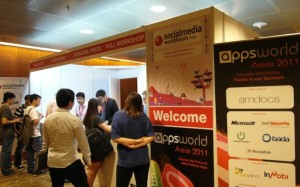 Social Media World Forum (SMWF) Asia is happening right now and the event space in Suntec City is buzzing with the chatter of the gathered social media glitterati, brand managers and communications professionals from Singapore and the region.

But what is really interesting this year is the accompanying Apps World Asia 2011, where there are specific tracks applicable to developers and programmers working in the web and mobile application spaces. While previous iterations of SMWF used to feature various companies who are in web and mobile application development, this time round an entire track has been put together for this space.

Opportunities and Challenges for Application Developers

In a developer panel discussion this morning, there was a muted but robust discussion around the creation, distribution and monetization of apps. Panelists shared that application developers should explore different distribution methods for promoting their applications beyond listing them on app stores – app discovery services, engaging with app reviewers, for example, were suggested.

CEO and co-founder of Swagsoft Aldric Chang recommended search engine optimization (SEO), especially for apps that have highly targeted audiences, such as those for legal and medical use. Chang also said that there are various paid and free app distribution services that can be leveraged. Sirina Sisombat of Haiku Asia shared that app stores run by mobile operators can be another potential avenue for distributing apps.

In response to a question about dealing with competition, Charles Tidwell of Smartroam and ChatTime says it is vital for application developers to continually test the robustness of their apps to make sure they work on every platform. Narmeet Singh of HD Interactive agreed, adding that another selling point they can offer to clients is great after-sales service – making sure that apps continue to work if platforms and operating systems are upgraded, for example.

Rise of the Apps

This year, the event have attracted many application developers to attend as well, either as participants, presenters or exhibitors. Alvin Koay, CEO and co-founder of app discovery store MobileApps.com who signed up for a booth to promote his service, said that the event was an extremely targeted audience.

“It’s a great platform to showcase an app marketplace to app developers,” Koay says, whose service is still in a beta stage. “There’s more exposure and I can get feedback from the developers and publishers, and iterating my product according to their feedback.”