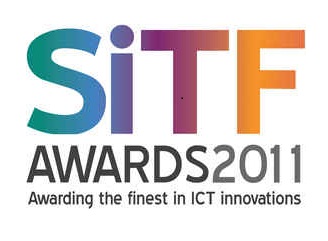 The Singapore infocomm Technology Federation (SiTF) earlier this evening announced the winners of this year’s SiTF Awards, which recognizes technology innovations developed in Singapore. This year, some of the thirteen teams out of a total of 177 entrants that emerged winners in their respective categories to clinch the top awards were a number of Singapore technology startups, perhaps a sign that the local technology startup scene is in its ascendancy.

“We are very encouraged by the creativity and innovation shown by some of the local start-ups. With proper guidance and investment, I believe some have good potential to grow and become commercially successful,” says Mr. Bill Liu, an industry veteran and one of the judges of the SiTF Awards 2011. All nominations were required to present to a panel comprising distinguished individuals of the ICT (infocomm technology) industry, CIOs of user companies, investors, academics and senior government officers, as part of the judging process.

The startup that emerged triumphant in the startup category was YFind Technologies, an indoor positioning solutions company that enables precise indoor navigation and tracking through smartphones and other mobile devices. Its win was all the more surprising because it was founded last December and was only revealed to the public last month. YFind co-founder Melvin Yuan says the team found it an experience pitching the many seasoned technopreneurs and businessmen who formed the judging panels for this award. “Winning it is deeply encouraging to us, because it means an endorsement by these very respected thinkers in the industry,” Yuan says.

He adds that he believed they won because they offer a very compelling piece of technology. “Our indoor positioning system will help people navigate with ease, in complex indoor environments; it will also help businesses understand how people behave in buildings, and how to best engage them,” explains Yuan. “It will unlock a whole new wave of innovation in location-based services that right now remains unrealized because of the lack in accurate indoor positioning.”

Wilson Nger of mobile marketplace startup Znapshop, a SiTF Awards 2011 finalist in the mobile applications category, says that being part of the awards is “a form of recognition for the company and has helped us get buy-in from users more easily”. Nger, a graduate of the Singapore chapter of the Founder Institute, adds that they’ve learned a lot in the pitching process, from always allocating enough time for a product demo, to knowing the judges so that “you won’t bore them with things they already know”.

Merit winners in the startup category were online events management application FlickEvents and 3D game engine developer Time Voyager, both of whom were unveiled in Echelon’s Launchpad in 2010.

“As Singapore continues to keep its competitive edge in innovation, it is important to provide the right environment, support and recognition for locally developed ICT solutions or applications,” says Mr. Eddie Chau, SiTF Awards Awards 2011 Organizing Chairman and also the first Vice Chairman of SiTF. “The annual SiTF Awards continues to be a critical platform to discover innovations and to nurture new ideas. We are excited to see a year-on-year increase in the number of nominations. This year, the SiTF Awards received a total of 177 entries, an increase of 20% over last year; reflecting the vibrancy of the local ICT scene.”

Here is the full list of winners of SiTF Awards 2011: