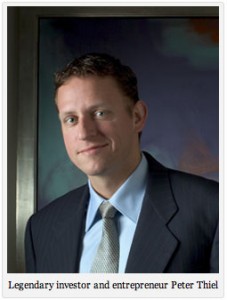 In this exclusive Caplinked interview with Peter Thiel – co-founder of PayPal and managing partner of Founders Fund – discusses why he  invested in Facebook, the differences between Wall Street and Silicon Valley, and why he would not start PayPal today knowing what he now knows. (Disclosure: Thiel is an investor in Caplinked.)

Last fall you announced the “20 Under 20” scholarship to encourage talented young people to drop out of college in order to pursue entrepreneurship. It’s been a controversial program. What is it like to sometimes take positions that are attacked by others? How do you stick to your guns in those situations when so many people are lined up against you?

While being the first to try something new or to speak out against something popular carries the risk of social embarrassment, over time, what was once controversial eventually becomes obvious. Just as it’s now clear that houses aren’t always great investments, more people are now realizing that college isn’t always the best option, either.

Since we announced the fellowship last fall, there has been a wave of discussion about how crazy the education bubble is. I hope our fellows inspire a generation to think more carefully about what they want in life and how to achieve it. Our economy needs more innovative and radical ideas, and to get them, we need more people to dream big, brave controversy, and take risks.

Early in your career, you worked briefly on Wall Street before returning to California to do private investing and later start PayPal. Why did you leave the practice of law and Wall Street so quickly? What was it about both of those environments that turned you off even though you had spent years preparing to go down that path in life?

I can’t say that I had the whole thing planned from when I started grade school. I didn’t think very hard about my decision to go to college or law school; they were default decisions if you had no other plan. I don’t regret any of it, and if I got to do it over I’d probably do it again, but I certainly would think much more about my decisions. Silicon Valley in the late ‘90s was exciting because it was so untracked compared to law or finance, and it was very rewarding to leave that track and take on much more intellectually engaging challenges.

Why are you so passionate about technology? You were a philosophy major and then went to law school. That’s not a typical background for a technologist. At what point did you decide technology was what you wanted to do with your life?

My general analysis of my PayPal experience is that if I knew then everything I know now about the payments space, I would never have started the company. It would be too intimidating. There were a lot of extremely difficult challenges we didn’t expect in advance. In that crucible, I saw how truly transformative breakthrough technologies can be. And then there’s the macro-reality of economic growth, which holds that things only get better the more a society innovates.

Technology is fundamentally about doing more with less. Once you realize that, it’s hard to think about doing anything else.

This article was first published in Caplinked. Read the rest of the article here.