by Robert Brands, author of “Robert’s Rules of Innovation” 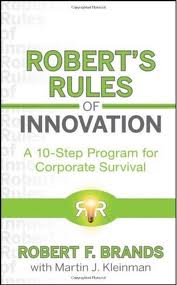 History has proven that innovation in the energy industry has almost always been driven by high consumer prices. When we had cheap and abundant oil – and low gas prices – during the 1980s, energy exploration and innovation slowed to a halt. We didn’t need it, and we didn’t see an end in sight to the steady stream of oil from the Middle East. So, investors held back funds for new technologies, oil companies stood pat and conservation became a four-letter word.

According to the Pacific Northwest National Laboratory for the U.S. Department of Energy, more than $172 billion dollars of government money was spent on new energy technology between 1961 and 2008, with the bulk of it being used during the 1970s. In the 1980s, the spending accounted for only 1 percent of all federal investment.

Oil companies, besieged by Congress over taking huge tax breaks amid record profit reports, could earn some much needed political points by taking history’s cue and putting some of that money back into energy innovations.

When you look at the broad spectrum of what the oil companies are making and compare it to the rate of innovation in alternative energy, it’s like comparing Mount Kilimanjaro to a grape. Now, most consumers aren’t aware of that truth, because oil companies and ad agencies are very good at making it look like alternative energy is humming along when it’s not. While consumers may not connect those dots, they are very aware of the headlines that show record oil company profits combined with massive tax breaks – especially during a time when federal deficits are threatening them, their children and their children’s children. Today’s energy innovation is a fraction of the total and what should be spend. What’s more, the same old song and dance the oil companies offer with regard to touring how much of a percentage their research and development expenditures are as compared to revenue is a joke, and absolutely no guarantee of success.

Brands wants oil companies to spark innovation not only because of the positive press it will net, but also because it’s the right thing to do.

The truth is that many scientists are beginning to calculate an end to the fossil fuel era, because one day, we will run out. Innovation in this area has been driven by high prices and it has been driven by shortages. When we begin to run out, we’ll experience both, and it will be too late to innovate. We need to do it now, when our resources to commit to it are abundant.

Robert F. Brands, a veteran of companies like GTE, Kohler and Rexam, is president and founder of InnovationCoach.com. Having gained hands-on experience in bringing innovation to market, creating and improving the necessary product development processes and needed culture, he delivered and exceeded bringing “at least one new product per year to market” resulting in double digit profitable growth and shareholder value.