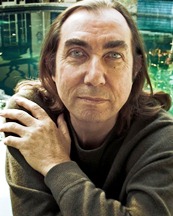 You may not recognize Pen Densham’s name, but you’ve likely seen his work.

Pen quit school at age 15 and then spent his formative years doing everything he could to conjure himself a career in film and television. With no formal education and the odds against him (almost sounds like a movie plot in itself), he forged a career writing, producing, consulting on and directing some of the most-loved movies and television shows from the last 20-plus years. His string of projects included Robin Hood: Prince of Thieves, Backdraft, Moll Flanders, Rocky II, Blown Away, as well as the TNT movie Houdini and the successful reboots of the classic TV series The Twilight Zone and The Outer Limits. He has worked with Oscar-winning talents like Ron Howard, Morgan Freeman, Kevin Costner and Jeff Bridges, and some of his projects have also won Academy Awards. And just for irony, the high school dropout now teaches courses at the University of Southern California’s film school.

He recently released his definitive guide to screenwriting, Riding the Alligator (www.ridingthealligator.com), a guide that advises writers to filter their final product through their passion. Recently, Marsha Friedman, CEO of EMSI Public Relations and author of the PR guide Celebritize Yourself (www.emsincorporated.com), had the opportunity to interview Pen about his passion for writing and his advice to aspiring scribes.

MF: Pen, let’s start with talking about the blank page, which is the scariest thing to many writers, myself included. What’s your advice on slaying that dragon?

Pen: One of the most vital things any creative person can do for starting their work is to commit a murder. The victim will pose as your best friend, but in reality, he’s your worst enemy when it comes to initiation anything artistic. It’s your own inner voice, the critic that we each seem to have, who so helpfully tells us that our work is probably a waste of time, that someone else has already done something better than this, that people will line up on the streets and point at your car as you drive by, laughing at you for even attempting to do something original.

This inner critic thoroughly deserves to be assassinated, because its opinions are patently wrong, destructively useless and seem to be part of every human being’s psychological equipment. It has many names. I call my personal one “The Golem” but it can also be called “Perfectionism” or “The Voice of Writers Block.” We don’t invite this character into our lives. He or she seems to have slipped in through some evil side door and taken up an obnoxiously self-confident residence in our brain, sitting in judgment of us.

In order to eliminate this parasite, one has a gigantically potent weapon… don’t try to make your work perfect. In fact, deny this character any power by choosing a mindset that says you are just writing a piece of crap. Yep. Crap. This decision frees your true soul from the clutches of Mr. Vanity (Golem), because there is no power to criticize crap, and the strange thing is, as you write without self-criticism, letting whatever comes out of your head fall onto the page, you are probably writing something of superb quality that, with a few tweaks and tucks in a rewrite, will surprise you with what you accomplish and thoroughly route it around our creator of procrastination, our internal critic.

I can’t agree more about the effects of self-criticism and where it can take us and I love your solution!

Many authors feel insecure about writing, because they may not have been formally trained as one. You dropped out of high school at age 15 to move to Hollywood with an aim of getting into the movie business. How did you overcome your lack of education to become an award-winning screenwriter?

When I was at school, I was always fed that the real writers — the Shakespeares, the Dickens, the Steinbecks — were beyond my ability. They were saints of literature and I was unlikely to ever accomplish any thing of consequence because I had terrible grammar, awful handwriting and, from my teachers’ perspective, a wildly uncontrollable desire to use my imagination rather than their formulas.

While my teachers thought they were doing their best for me, I felt they were clipping off parts of my personality, so I fled the education system at 15. Their feeling was it was my funeral and, to be honest, it was my father’s feeling too. He tried to force his untamable son into a job at an electric blanket factory, so at least I would have a future. Luckily the owner of that establishment saw through my feigned interest in thermal bedding and rejected me, probably saving several of his customers from electrocution.

Since the age of 4, literally from when I was a little child riding on an alligator in my parents’ theatrical short films about people who kept strange pets, I knew I had to be in the creative arts… preferably film. This dream completely impassioned me. I lived to use cameras. I loved to read trashy stuff like adventure stories, science fiction and strangely had a giant fascination about human nature, along with a lust to take photographs.

Freed from the academic world’s choices, I blossomed as a reader, literally constructing my own way of thinking and learning that, even after leaving school at 15, there were outlets that would buy my photographs and articles. As I learned from the “school of hard knocks,” I kept discovering that my imagination could create things that, with some effort and adjustment, there was a market for. It took years for me to trust that I was an artist and to value what I had to say, but my passion never left me and the search for my creative destiny felt so sacred and so special that I frequently took on impossible odds, and won enough times to feed myself and my family.

Great story Pen. I admire the insight you had at 15 to recognize how stifled you were by the school system and mostly I admire the “courage” you had to leave it!

Tell us, what do you consider to be the role of passion in writing?

What has amazed me, as I came to discover, was that working in Hollywood, the studios paid me lavish amounts to write screenplays that seldom seemed to get to the screen. And yet, when I stole time from that effort to write something for myself, some story that my gut instincts wanted me to write, these screenplays got made much more frequently. I created the story for Robin Hood: Prince of Thieves after three studios rejected the idea, because my soul wanted to tell that story in a new way, and my partner, John Watson, supported me by co-writing the screenplay. My movie about Moll Flanders, which Robin Wright and Morgan Freeman starred in, was a script that poured out of me in a fascinating torrent of words that I could barely write down fast enough to capture. My love for the unique character of Harry Houdini turned into another self-inspired screenplay that also got made.

These made me think that writing the stories that come naturally to you may well mean those stories are more powerful, that you will fight for them longer, and that others recognize their uniqueness and depth, and are attracted to them. I’ve come to call these “Life Scripts” because they are so much a part of me.

What advice can you give aspiring authors who want to turn their stories into screenplays?

In Hollywood, I describe screenplays as the enemies of people’s weekends. Frequently decision-makers go home with five or even ten screenplays. The first thing they look at is the last page to check the number and see how much they are going to have to read. Shakespeare once said, “Brevity is the soul of wit.” Brevity is certainly the secret to screenplay writing. Screenplays are condensed passion.

Books and novels are the complete reverse, an opportunity to luxuriate in a warm bath of words, day after day, as one explores the complex, thematic storytelling that only books allow. To translate a novel into a screenplay, one must bear in mind that if you took out all the white space in a script and combined all the words together, there’s probably only 40-50 pages of text. Essentially, a movie running an hour and a half or two hours is a short story and seems to follow an almost invariable rule of beginning, middle and end.

So to translate a novel to the screen, one must find the essential bones that give the story strength and structure, and compact only what you need to keep the audience knowledgeable of your characters, the tone and the plot’s goals, and streamline it so that it fits the structure of a feature film. The great thing about working from a novel is one has already established the entire canvass and you are now picking out the strongest points of the composition, which is in many ways an easier task than imagining something brand new.

You’ve sold a number of screenplays and concepts to studios over the years. Is there a formula to selling something you’ve written?

There is a terrible, but possibly highly accurate, perception that Hollywood executives have the attention span of a gnat. Not wanting to insult gnats, one might explain that both have much shorter life spans and deserve to live in this way. Actually, Hollywood buyers are this way because there is so much material being pushed at them, and original and different material is very hard for them to trust. Thus we frequently see sequels and remakes instead of new and original material, even though the marketing analysis people tell us that audiences desire fresh and different stories.

The tools to capture the attention of your film buyer are to explain your material to them in terms of successful previous hits, thus Jaws in outer space = Alien. North by Northwest meets James Bond = The Bourne Identity. The Haunting meets The Blair Witch Project = Paranormal Activity.

Every executive is looking for a hit. That is their goal in life. So by defining what you are selling in terms that have already succeeded, you give yourself a large advantage. When a movie is being sold, frequently it comes down to a poster or a selling line like “Just when you thought it was safe to go back in the water” that must motivate tens of millions to go to the theater. It’s unfair, yet rational, that our art has to come down to a catch phrase; we are asking the studio to invest an enormous quantity of money and maybe we have to hold their hand a little to help them through the scary parts.

How COVID-19 Is Shaping The Future Of SaaS

5 Reasons To Invest In Software Testing

Ways To Achieve A Positive Mindset And How It Will Help...