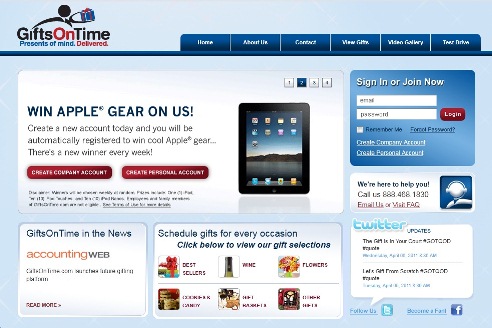 GiftsOnTime (GiftsOnTime.com) is an online gifting platform that lets professional service providers to select and schedule client gifts to celebrate any occasion, with delivery throughout the year.

Ron Orleans is the co-founder and CEO of Boston, Massachusetts-based GiftsOnTime, and the accounting veteran of 30 years created the site as a new concept in web-based gifting by enabling “future gifting”, empowering professional service providers with a time efficient tool to build positive relationships with clients, contacts, and staff members. “Traditional marketing tactics like newsletters and e-mail blasts have simply become white noise to clients,” says Orleans. “Our new platform offers professional service providers a way to stand out from the crowd by delivering personalized gifts that deepen bonds with existing clients, and generate priceless word-of-mouth marketing.”

Since its launch last November, the company has attracted users from over 20 states and has partnered with major online retailers including Wine.com, Red Envelope, and ProFlowers to expand its range of gift selections.

What’s really interesting is that Ron co-founded GiftsOnTime together with his son Josh, 25. The University of Delaware graduate previously worked in Liberty Mutual in the area of business systems analysis, and was largely responsible for developing the prototype for the GiftsOnTime platform. Josh today serves as the busines’s director of technology.

“I didn’t know what to expect when my Dad and I decided to do this and truth be told, it’s been great,” says Josh, when asked about working with his father. “From Day One my Dad has treated me as a partner, not an employee. His philosophy was that for me to thrive and learn the most, I needed to be in the shoes of a business owner – not an assistant to one.”

“As partners, we have our own specialties. My specialty is IT-related while Ron’s specialty is management, and every partner does sales! He steers the ship, but if a sail needs to be raised, he doesn’t need to tell me to do so—I already know it needs to be done. Ron’s words do hold a little more weight in the office. With a career in accounting that lasted over 35 years, my dad is quite well respected,” Josh adds.

Ron says that they’ve always had a close relationship, and Ron himself had the opportunity to work with his own father – Josh’s grandad – so he was somewhat prepared for the father-son working dynamic. “It was very important that Josh and I have different jobs to do, so we did not have to confront as many issues that could cause conflict. I also understand that I have many more years of experience than Josh, so that was the basis for my ability to mentor him, which, to Josh’s credit, he welcomed that relationship. There have been times where we have had our disagreements, but we always know that our love is stronger than any business conflict.”

“It also helps that Josh knows that I am always right,” Ron laughs, half-jokingly.

Their family did look on at the father-son business with a mixture of excitement and concern. “We promised our family and ourselves that family comes before anything. We rarely talk about work when the whole family is around,” Josh shares. Ron says that his wife was initially skeptical, then realized that both Josh and he were well aware of the potential pitfalls and would not let them get in the way of things.

Josh admits that a good father and son relationship does not necessarily translate into the same thing in the workplace. “We really had to learn each other’s style of doing business. More specifically, the way in which we communicate was the biggest obstacle to overcome when we first started this adventure. It took a couple months, but we eventually came to a happy medium,” he recalls. Ron agrees. “Josh and I both have a tendency to be passionate about our point of view. This is a good thing and sometimes causes excitable conversations. We have always been able to have these somewhat heated discussions, but have never had them spill over into our personal relationship,” he says. They give each other hugs when they recognize any tensions between them.

“I have great respect for what Josh has brought to the business and know that this has been truly a team effort. It makes me proud to see Josh stand up for what he believes, and he has a keen business sense,” Ron adds. “I have learned a great deal from him and believe I have taught him much as well.” 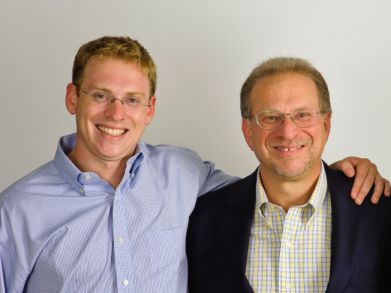 “Over the last 35 years I built a successful CPA practice, but I always struggled with the demands on my time. First to service my client base and second, to deal the firm related responsibilities including marketing,” Ron explains. His wife had a quote posted on their refrigerator – ‘Some people spend a life time waiting for a good idea to hit them’. “I often see that and think, most people have good ideas all the time, and it’s what they do with those ideas the matters.” And GiftsOnTime was the idea.

“If (entrepreneurship was) easy, everyone would do it,” Josh says. “You work all the time, you’re constantly on call, and you have the stress of a company (and your future) on your shoulders.” But he adds that there’s no experience on earth like entrepreneurship, and Josh says he can’t imagine his life any other way.

“This quote sums it up better than I could: ‘Don’t worry about failure. Worry about the chances you miss when you don’t even try’.”