PlayNice.ly (www.playnice.ly) is a project management app developed by London-based software startup Playnice.ly Labs that is aimed at small teams of developers, as well as anyone else involved in projects, such as designers, product managers, etc. What’s interesting about PlayNice.ly is that they inject a bit of fun into project management – adding a bit of gamification into, for example, bug tracking.

“The PlayNice.ly philosophy is to take the pain out of bug tracking,” says PlayNice.ly co-founder Adam Charnock of the Redis-based app. “Although bug tracking is an essential aspect of professional software development, it can be mightily boring. We try to solve this with a clean and gorgeous interface that is a pleasure to use, and badges to encourage positive productive behaviour.” For example, if you squash 20 bugs in a project, you get to unlock a “Squasher” badge.

As for why the team decided to work on a project management app, Charnock explains that while the market is crowded, it’s been a mixed blessing for them. “Two years ago I saw an oversupply of slow, frustrating and unengaging bug trackers,” says Charnock. “Cryptic search queries and masses of drop-downs where the norm, but why did it have to be that way? Why could I not easily find the bug I wanted, change it with a single click, and then get back to what I love – writing code?”

” We know there is demand for PlayNice.ly and our users love what we are doing,” he says. “On the other hand we need to ensure we show our competitors’ customers’ how much better their lives’ could be.” 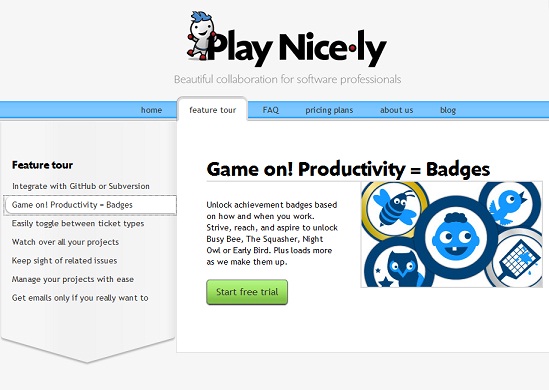 26 year-old Charnock insists that despite many in the industry slagging off the gamification of applications, it does really work with developers. Yahoo-owned photo-sharing site Flickr, for example, uses it internally to track bugs, and Charnock says Andy Baio of Kickstarter said at SXSW last year that he’s been “waiting for a public bug tracker to do this”. In fact, Charnock reveals that one of the recurring feature requests is for more badges. “Now that we have the core engine built and working well, we’ll be focusing on fleshing out the badge system, along with all the other features and refinements we have planned.”

PlayNice.ly has been out of beta since December last year, and currently have over 1,500 users. According to Charnock, the subscription-based service – it provides tiered monthly plans of between £9 and £100 per month – is really aimed at independent or freelance developers and small agencies, especially those who plan to moving into open source solutions and grow into larger teams in the next six months. There’s also a future plan to offer a free plan for public open source projects.

Aside from Charnock, there are two other members in the PlayNice.ly team. There’s Rob Hudson, 27, who was previously a web developer and started out working on defense research, as well as Basheera Khan, 32, who’s previously blogged for TechCrunch, The Telegraph, and ComputerWeekly and now works as a UX Designer for EMC Consulting. Charnock himself was a freelance web developer for three years prior to starting PlayNice.ly. 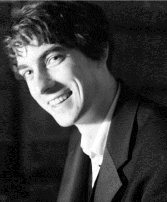 Charnock has some advice for developers working on their products. “My advice to any entrepreneurial developer is to stop developing and start marketing,” he says. “Writing code is far too much fun, make sure you spend a significant chunk of your time getting the word out rather than cutting new code.”

For entrepreneurial non-developers, his advice is to find a technical co-founder. “You’ll end up with a better product and a much happier bank account.”