Here’s an unusual online gaming site whose target audience isn’t normally found online – babies and toddlers. Kneebouncers.com was launched by entrepreneurs Jim Robinson and Kurt Dommermuth in 2009 as a way for very young children to experience the fun of computer gaming even before they are able to really understand computer functions. The youngsters play simple child-friendly games by tapping on the keyboard.

It was their own children who inspired them to start Kneebouncers. “We noticed the lack of good content online – especially for our youngest kids,” explains Robinson. “So we decided to create some simple games that did not need a mouse to be played.” They shared it with family and friends, and within a year they received emails from parents and teachers from every continent raving about the games. “And today, although we have never advertised the site, we get about 3.5 million visitors a year from over 180 countries. All word of mouth,” he declares proudly. He says that some young parents even shares how their three-month old babies loves the site, although he doesn’t quite recommend that.

“At that age I feel the site is more of an online rattle than anything else,” he clarifies.

Interestingly, Dommermuth and Robinson first met as high school kids who worked in the same supermarket, and ended up in the same college and even roomed together in their freshmen year. They lost touch with each other after that for 15 years. Robinson went on to start his own advertising design business, and when he was starting to do more web-related materials he wanted to learn Flash. “I downloaded a tutorial that made it easier for me and looked to see who wrote it so I could download more from them,” recalled Robinson. The author of that tutorial? Kurt Dommermuth. “So I called Kurt and we started working together creating award winning websites!” 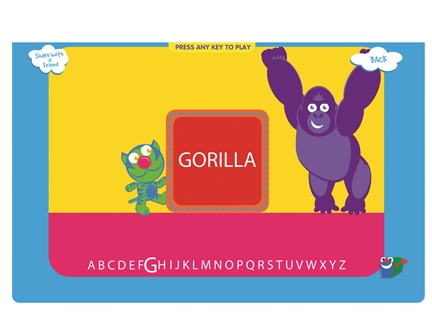 Although some studies have argued that computer devices and mobile devices can affect the normal child development, Robinson takes such criticism in stride and appeals for moderation. “As a parent, and an active web user, I know the attraction that the web and the mobile devices have on kids,” he says. “They see their parents or older siblings using the devices so they want to do it too. Our goal for Kneebouncers is to create and provide the best content so the child is encouraged to discover more.”

“Most of our games are very simple, we try to give the little ones a sense of accomplishment and help them grow their self esteem, while playfully learning something along the way.”

But not everything has gone as smoothly as the founders would have liked. The site recently encountered customer fallout as it decided to expand to more games and charging US$19.95 per year to play – its Facebook page was inundated with messages from users threatening to leave the service. “Customer reaction has been passionate,” Robinson admits. “Some are mad – (but) some think it is great.”

But the response, Robinson believes, showed that people cared enough about the site. “It is apparent that what we have created is good and that kids love it by the response we have received.”

“When we switched, we left three games out for anyone to play for free.”

In any case, it is clear Robinson and Dommermuth feels extremely passionate about their site. “Making Kneebouncers games makes us happy,” declares Robinson.

“Do what makes you happy.”