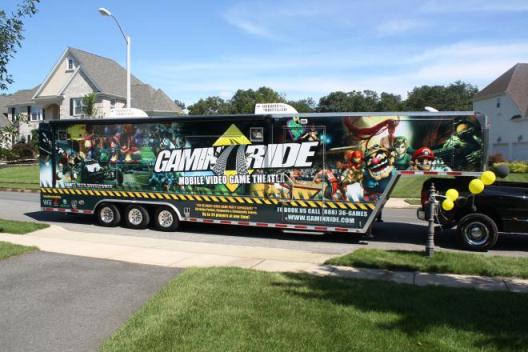 A huge trailer rolls up to a suburban neighbourhood, the peace and quiet suddenly and inexplicably shattered by its blaring sirens and loud music. Enter Gamin’ Ride, a mobile indoor-outdoor entertainment theater that packs a chockful of gaming goodness including game consoles such as the XBox360s, Wii and Playstation 3s, jumbo high definition televisions, as well as funkier peripherals such as vibrating seats and even Smell-A-Vision. Its contents are the stuff of a teenager’s digital wet dream – and also the essentials to a perfect gaming party.

Gamin’ Ride offers basic two-hour party packages that start at US$349 with the use of standard video game consoles, and goes up depending on the type of requests from clients, with additional non-video game type activities such as laser tag, water tag, sumo wrestling and dance machines. Guests board the truck (which are handicap-accessible), and are hosted by a Game Guru, whose job is to ensure some semblance of control as they peruse interconnected video systems that allow up to 24 people to game together at once. As you can imagine, it’s wildly popular with kids – about 55 percent of its revenue is derived from birthday parties – but Gamin’ Ride also gets clients in schools that host family fun nights, fund-raisers, and graduations. Corporate events comprises 30 percent of its business.

It’s not surprising that business has been good – according to the U.S. Entertainment Software Association, some 68 percent of Amercian households play video or computer games, and in 2009 alone, the sales of video games in the U.S. topped a massive US$10.5 billion – this during an economic downturn. 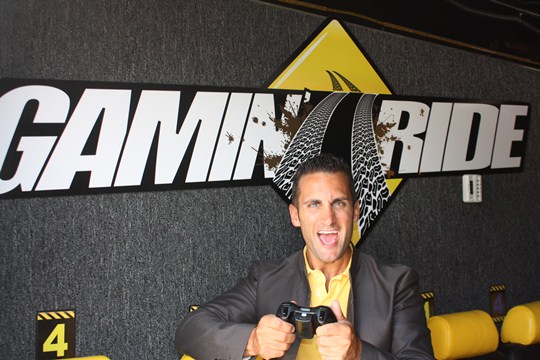 New Jersey-based Gamin’ Ride is the brainchild of 31-year old Michael Falgares, its “chief experience officer”. Gamin’ Ride is not Falgare’s first entrepreneurial venture though – he started event planning services company the Rhythm Rockers Entertainment Company (today known as Interactive Productions, LLC) when he was still in high school. Interactive Productions later bought out Gamin’ Ride in 2008, and Falgares – an ex-elementary teacher – then introduced the  innovative Earn N Burn school fundraiser program, which focuses on helping schoolkids fight child obesity through Gamin’ Ride‘s fitness-oriented games. Students took three weeks to get pledges, and Gamin’ Ride would go to the school for an all-school, video fitness event with games like Dance Dance Revolution and iDance pads. 70 percent of the profits goes back to schools.