Five dollars isn’t much, really, in the scheme of things. In fact, in some cities you can barely buy a sandwich with five dollars. But Micha Kaufman and Shai Wininger, founders of e-commerce site Fiverr.com, believes that there can be an entire marketplace where people can purchase and sell services at the fixed price of US$5.

Launched in February 2010, Fiverr.com currently offers more than 75,000 services ranging from marketing, technology and advertising support to fitness, nutrition and fashion advice. Any service you can imagine sells on Fiverr.com for a quick, non-negotiable US$5 – it’s a quirky place for a quick bargain. At last glance, someone is offering to draw a cartoon animal for US$5, while another is willing to transcribe an audio file (many journalists I know would willingly pay for such a service).

“The idea is that everyone can be an entrepreneur,” says Micha Kaufman, CEO and co-founder of Fiverr.com. “We offer a very easy way for people to share their talents and skills to start making money. We’ve learned of some amazing stories of sellers building up a client base, sharing samples of their work and what they can do, sometimes even leading to new career opportunities. It’s pretty amazing.”

Give Me A Five 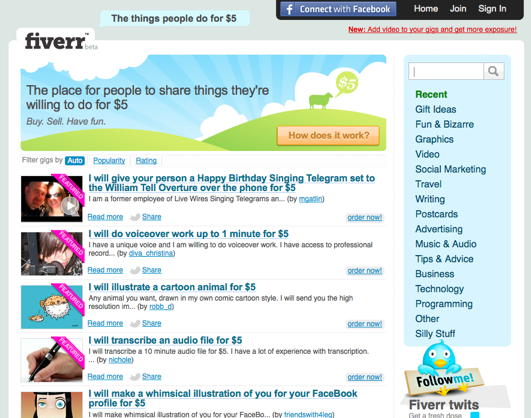 Here’s how Fiverr.com works – a potential seller can list any product or service – in specific categories such as business, technology, gift ideas, silly stuff, etc – as a “gig” on the site. When someone wants to purchase that offer, they simply place an order with Fiverr.com – at US$5, of course – which ends up on the seller’s job cue. Once a gig is completed, the site gives the payout. Buyers can rate the gigs ordered so that other potential buyers know if the offer is up to scratch.

Anonymity on Fiverr.com, says co-founder Shai Wininger, is key. Since messages between buyers and sellers are sent through the site, a user’s true identity is not displayed.  “Another concept that helps make Fiverr.com so successful is the simple price point,” Shai says. “If you take bargaining out of the equation, things become so much simpler between a seller and the buyer. Five dollars is a very convenient number….and buyers are realizing that, in the end, they are usually getting a lot more out of the service than what they paid.”

“We chose US$5 as the standard price point because it’s a convenient price,” adds Micha. “In today’s economy, people are more aware of their spending, but they don’t think too much about spending US$5 since the risk is low. On the seller’s side, they offer a service at a very reasonable price, and have the opportunity to make a very nice income if their service gains popularity.”

Micha Kaufman started his career as a lawyer, practicing intellectual property law, computer law, and technology licensing. 12 years ago, he started his entrepreneurial journey, opening a number of software and Internet startups. He then tied up with Shai Wininger, also an all-round veteran entrepreneur with a background in business, technology and product design, for Fiverr.com.

Shai and Micha realized that there were many things that people do that waste a lot of time, and can actually be easily outsourced to someone else who is better experienced to deal them. “Why not hire someone for a small fee who can get it done in three minutes?” Micha asks. “Today almost anyone is or can become a micro-entrepreneur — most people know how to do something that can be of value to someone else.”

“Fiverr.com makes those ‘micro services’ accessible to anyone in the world.”

Micha says their biggest achievement to date has been successfully launching a website that provides a service that people actually want to use that taps into a previously untapped market. “When you launch a site, especially without doing any PR along with the launch, it is always difficult to predict how much traffic it would receive over the first few weeks or months,” Micha says. “Three days after we launched Fiverr.com, the media started picking it up like crazy — we were on Fox News, in The Wall Street Journal, Yahoo!, CNN, NBC and other major news outlets. You rarely see a business take off so fast.” In fact, the traffic from all that exposure came so fast and so furious that they had a challenge in trying to scale up their service and customer support.

Entrepreneurship is about doing something you’re passionate about,” Micha declares. “It’s about setting goals and pursuing them to the fullest.”  Your personal interests and your passion for those interests should be the driving force behind what you do, he adds.

If there’s one thing Micha would like to share with other entrepreneurs, it’s that entrepreneurs should not be afraid to fail. He points out that behind many successful entrepreneurs is the trail of magnificent failures behind them. If you fear failure, you’re likely to perform badly, he says. “If you allow yourself to fail and make sure to learn from your mistakes, next time you start a venture, odds are you will not make the same mistakes again,” he reasons. “This means that you will be a wiser, more experienced entrepreneur with higher chances of hitting a home run with a future venture.”

He adds that the Internet allows you to put your ideas to the test with very little time and resources. “Failing fast is always better than spending years of your life on ideas that have no chance out there. Release often, iterate, repeat and if it does not stick — cut your losses and move on.”