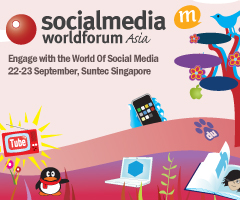 Opening presentations at socialmedia worldforum Asia established what we already knew – that social media is spreading like wildfire in Asia.

Spread over September 22 and 23, socialmedia worldforum Asia brought social media thought leaders from the region to Suntec Singapore Convention Centre today. Blake Chandlee, Facebook’s VP & Commercial Director, EMEA, Facebook, opened this morning’s conference with a convincing keynote – that social media is here to stay, and more and more users are coming onboard. With the current 500 million users around the world and three billion photos uploaded on a consistent basis, Facebook is still optimistic of further growth.

The common tone seems to be that the numbers for the global social media brands are rising for the Asian region – Facebook has 75-percent of its users coming from outside the US and India’s Twitter has seen a 1000-percent increase in user growth.  Local social media players and brands are not able to be as visible as big-time names (like Facebook, Twitter, Foursquare and youtube). Digu, China’s equivalent of Twitter, has not been able to penetrate the world market as much. Broadband inefficiency in Indonesia, and the availability of Blackberry seems to be impacting the local social networking culture – still, Indonesia is the world’s third largest user of Facebook.