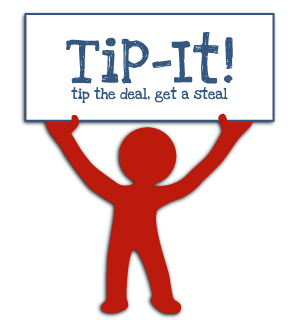 Steven and Nicole, both of whom study in the United States –  New York University (Stern) and New York University (Steinhardt) respectively – found out about the success of group-buying site Groupon was having and shared it with their National University of Singapore (NUS) undergraduate friend Bryan about five months ago. The three felt that it was a great shopping concept that will definitely work in Singapore.

“Honestly speaking, we are just typical college kids,” says Tip-It! co-founder Bryan Sio. “The only thing which sets us apart is our insatiable passion to explore new places and try out new restaurants. We recently heard about Groupon and realized that this marketing strategy was a great way to introduce deals and share new and exciting places with our friends and the public. Thus, we came up with Tip-It!, which aggregates the masses to leverage on greater buying power.”

Bryan says that the inspiration for site’s name comes from Malcolm Gladwell’s book “The Tipping Point”, which talks about how there needs to be a critical mass reached before an idea or phenomena ‘tips’ over and just snowballs. “We hope that we can bring everyone together and ‘Tip’ the deals together and enjoy great savings while discovering new places.”

He says so far they’ve faced many challenges in starting up Tip-It!. “Both Nicole and Steven are based in the US as they pursue their undergraduate degrees, leaving me as the only one based in Singapore. As such, it is difficult to organize meetings at times due to the different time-zones,” Bryan shares. “Therefore, we have to split our tasks more efficiently. Steven handles the main administrative and financial matters, Nicole handles customer relations and website literature, while I am the one in touch with retailers.”

There is a silver lining, however. “The good thing about living in different time-zones is that we can provide our retailers and customers with 24 hours of personalized support!”

Tip-It! is currently funded solely by the three founders to a tune of just S$7000, a tribute to the scrappy nature of bootstrapping entrepreneurs. “(It’s) definitely much lower than other companies but we can only make do with what we can come up with and make up for the rest with sheer, hard work,” says Bryan. Not only did they had limited finances, they had no technical expertise and so had to source for a web designer. “We experienced some obstacles with the website, and the one that we have right now is only a beta version with certain constraints,” says Bryan, who adds that they are now working with the designer to get the final site up as soon as possible.

Bryan admits that they are just a small company, run by three undergraduates. But he says being small has its advantages too. “We believe we can provide a personal touch to our customers and retailers as there are essentially no layers between them and us. This direct approach allows us to… adapt and react to comments rapidly and implement changes and suggestions much more efficiently.”

One of their key achievements was garnering more than 600 followers even before the launch of their first deal. “Getting retailers to be listed on our website is one thing, but if we do not have enough followers before we launch, the deals on our website will not “Tip”.” The first deal on the site received more than a hundred purchases.

“We are content with the response thus far but will keep pushing on further promotional mechanisms, website upgrades and others to ensure that we can deliver the best experience possible.”

Entrepreneurship: All About Hard Work And Passion

Tip-It! founders Bryan, Steven and Nicole wants to encourage more aspiring local entrepreneurs to step into the society and start on their business. “Don’t be fearful, be daring,” declares Bryan. “But always be certain that you are not just hopping on the bandwagon of a good idea, make sure that you really harbor a strong passion for it, if not you will quickly be disheartened.”

Entrepreneurship, Bryan says, was definitely an eye-opener and says ‘you can never experience it from within the classroom’. “The lessons you will learn, not just on starting or running a business, but on personal communication are invaluable. You have to experience it yourself, and it will be a great something you will never forget.”

“You always hear people saying that starting a business is not easy, and requires a lot of hard work, but trust me when I say that that is a huge understatement,” shares Bryan, adding that entrepreneurship not only require hard work but a healthy overdose of dedication and passion as well. “What you must really make sure is the idea is something you truly believe in and are passionate about.”

It’s easy to come up with ideas, and you’ll always have the drive at the start, says Bryan, but soon you’ll discover that the process is very tedious and there will be many times when you question yourself as to why you even bothered to start it in the first place. “It is at this point in time when passion will make or break you. If you are just in it for the idea or its potential, the drive will be drained out of you and you will become discouraged.”

“Passion will be what keeps you going and makes you truly believe in what you are doing.”