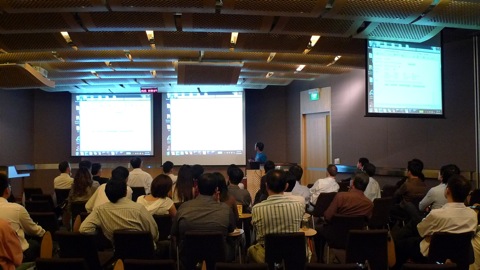 Contributing writer Caroline Yeung had the opportunity to talk about Young Upstarts at a recent Azione Capital–Microsoft BizSpark night. Addressing close to 100 members and guests, Caroline highlighted featured companies, and partners who have worked with Young Upstarts since its inception. She also talked about public relations fundamentals for her second presentation. On this evening, three individuals also pitched their mobile applications for Windows Phone 7 at this first Azione Capital–Microsoft BizSpark co-call for proposal collaboration and they included the following:

Panellists for this pitching session included:

Scheduled every two months, BizSpark’s Start-up Night is aimed at technology entrepreneurs and companies. The event presents an opportunity for mingling and expertise-sharing amongst fellow technology entrepreneurs, investors and like-minded innovators. BizSpark aims to provide software, support and a visible platform for entrepreneurs to understand more about the interaction between technology and business which in turn will help them to succeed at different stages.

“Within BizSpark, we have a set of network partners that we have good relations with, and they are from all over the world. These organizations include incubators, government agencies, universities, and media. They are all positioned to help our entrepreneurs and start-ups to succeed,” said Eugene Fabian, Program Manager, Microsoft Innovation Centre Singapore.